As we have wound down from the summer and fall seasons, we thought to update the web on the happenings at Wekusko Falls Lodge:

The spring started off with some good pike and lake trout action on Tramping.  A few masters of each were caught in the shallows (nothing huge but respectable fish).  By the end of May fishing was really strong on Tramping, which only continued as each day passed and we started to pick up a lot of 30"+ eyes.

As the first solid week of fishermen showed up the second week in June, things really heated up for walleye.  By the end of this week we were already at 127 master angler walleyes, the largest being 33", which ended up being the largest from tramping for the year.   This week was hit with rain everyday and our water level stayed high.

Following this kick start to the season, the tap was turned off and so did the fish.  We did continue to catch big fish, but it wasn't as fast and furious.  There were days of big fish, then of just small fish, but the bite was still on.  During this time, some big pike were being caught, with 43" being the biggest. As the end of June arrived, the big fish were tough to catch, when all of a sudden they turned on.  I just happened to be guiding at this time, and we ended up landing 13 master walleyes in one day, with 5 of them being over 30".  A day for the books!

During July, lots of fish were caught with some real beauties in the mix.  By mid July things were really great!  I had never seen so many fish on a finder at one time.  It was a problem to keep the smaller fish off the hook and let the big ones hit.  Hope next year brings the same!  Down at Wekusko, the evening bite was on, and we were catching a lot of walleye every outing.  It was good to see all the sizes of fish- 6" to 26", which is a good sign for the future.  Sauger on Wekusko were also on the hit list during July. Many were caught, most being masters.  The biggest caught this year was 22", a big fish for the north.

August continued with decent walleye fishing and some amazing big pike.  Lots of master Pike were reported, 43" being that longest.  Master walleye were also still coming out, with 30" being the longest.   As August continued on, our water levels started dropping... and before we knew it, September rolled in...  We had the Cisco Kids in mid september, and they caught a lot of Pike (couple of master's).  They also did really well with the walleye on Wekusko.  As the month continued, our fishermen slowed down, and so did the fishing.  Soon it will be time for ice fishing!

Thank you to all the fishermen that came in and stayed with us in 2012, we believe 2013 will be another outstanding year!

Our totals through camp for masters in open water this year ended up being: 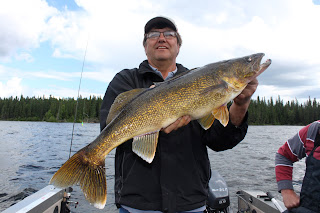 Posted by Wekusko Falls Lodge at 7:16 PM No comments: