Yes that's right.  Gone are the old rickety, un-level, narrow and wobbly docks.  I have come up with a solution so every boat will get it's own spot and no juggling boats to get out!  It was a way bigger project than I expected, but it sure turned out great.  I just have a couple of small slips to construct in the spring, run power and lights, install the tie down anchors and will be in business!  Just a few details about it- the main dock is just shy of 150' long, 5 feet wide, and a sitting area!  I also plan to router out some holes and cover plexi glass so kids can look for fish under the docks.  It will be just another touch to make the overall experience that much better for our clients. 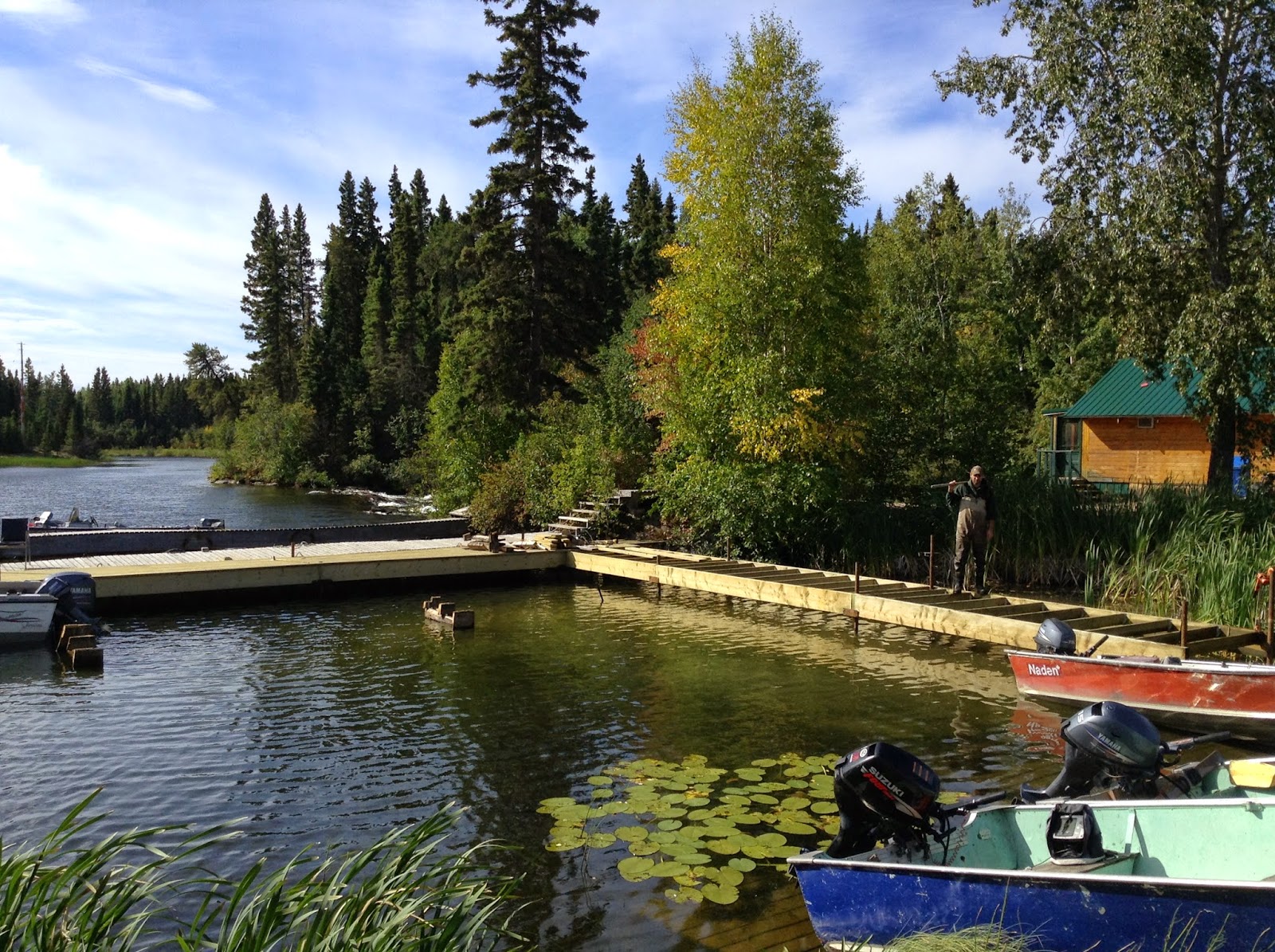 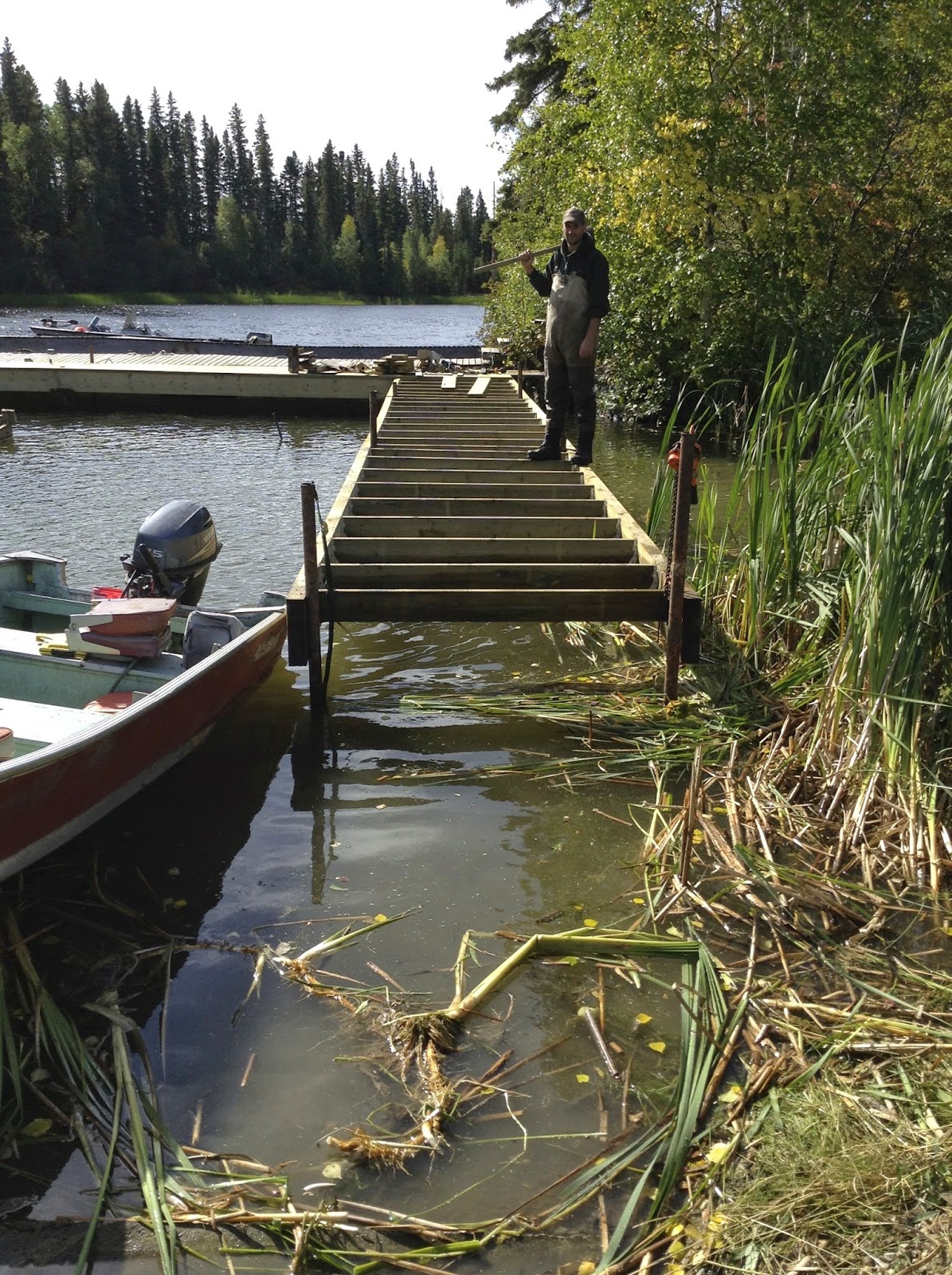 This year was a very busy one, as it was a busiest bear season and open water.  I also built the new cabin and new docks, and time was always allotted to work rather than play.  But I did manage to escape reality a bit.

First was in August where we had to leave to go to our friend and guide Naoto's wedding.  It took place on Pigeon Lake, Ontario.  Elissa and I left the lodge with my parents, the kids with her parents, and retreated to some relaxation.  The bachelor party was as follows- a bunch of us guys fish Pigeon Lake hard, and I mean die hard.  It was alot of fun...and I caught my first Largemouth Bass.....and apparently it was pretty big! 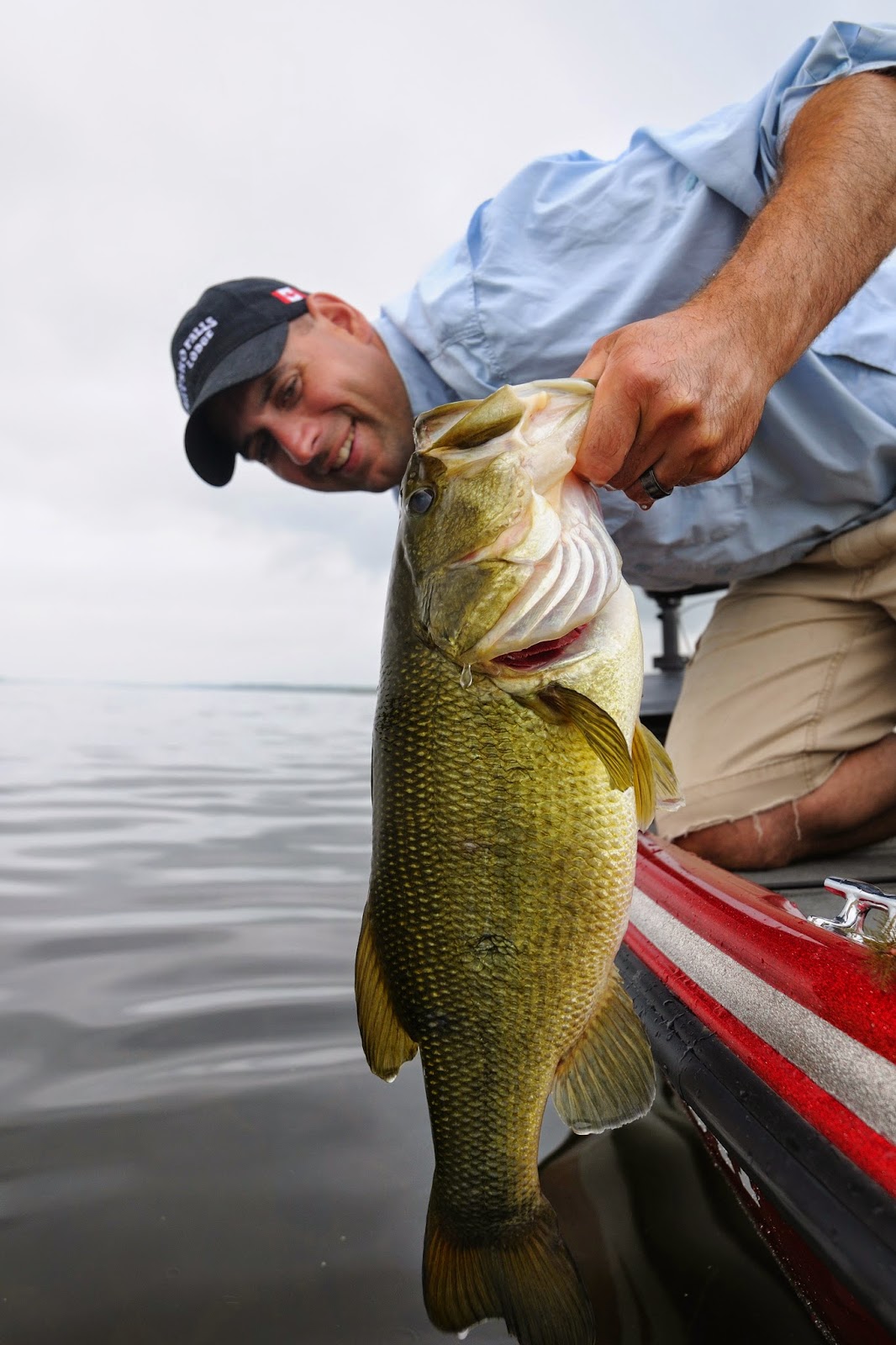 The next "get away" was in September, where I got away to moose hunt.  I hiked in 2 miles to my new secret spot and set up some scent and did some calling.  The next morning I slipped back in there and the bull moose had received the script.  The 300 win mag did it's job, and I anchored my first Manitoba Moose...a 44" bull!  And what a work out and story of getting the darn thing out! 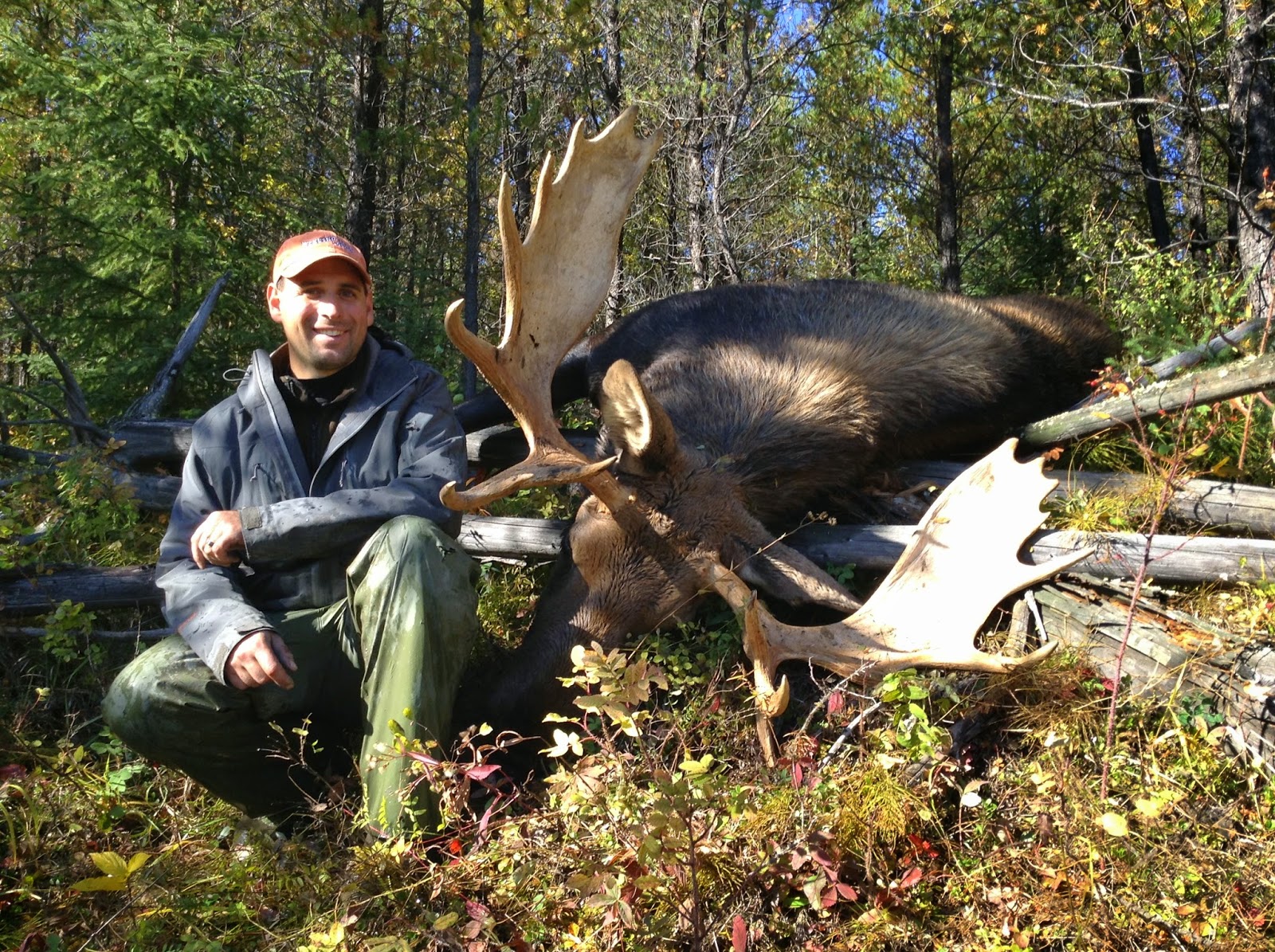 I also got away in October to head to my family farm and do some bird hunting with Maggie, my dad Allan, Elissa, and some of my clients and friends from Wisconsin.  We had great duck hunting- killing our 40 birds a day without much effort...but the geese had our number- a first for me ever down there.  They were so inconsistent on the fields, but one morning we managed to pull a few down to the decoys and let them have it.  Maggie did amazing and you could tell she was in her glory.  I still say that blasting alot of shells is the best stress reliever there is! 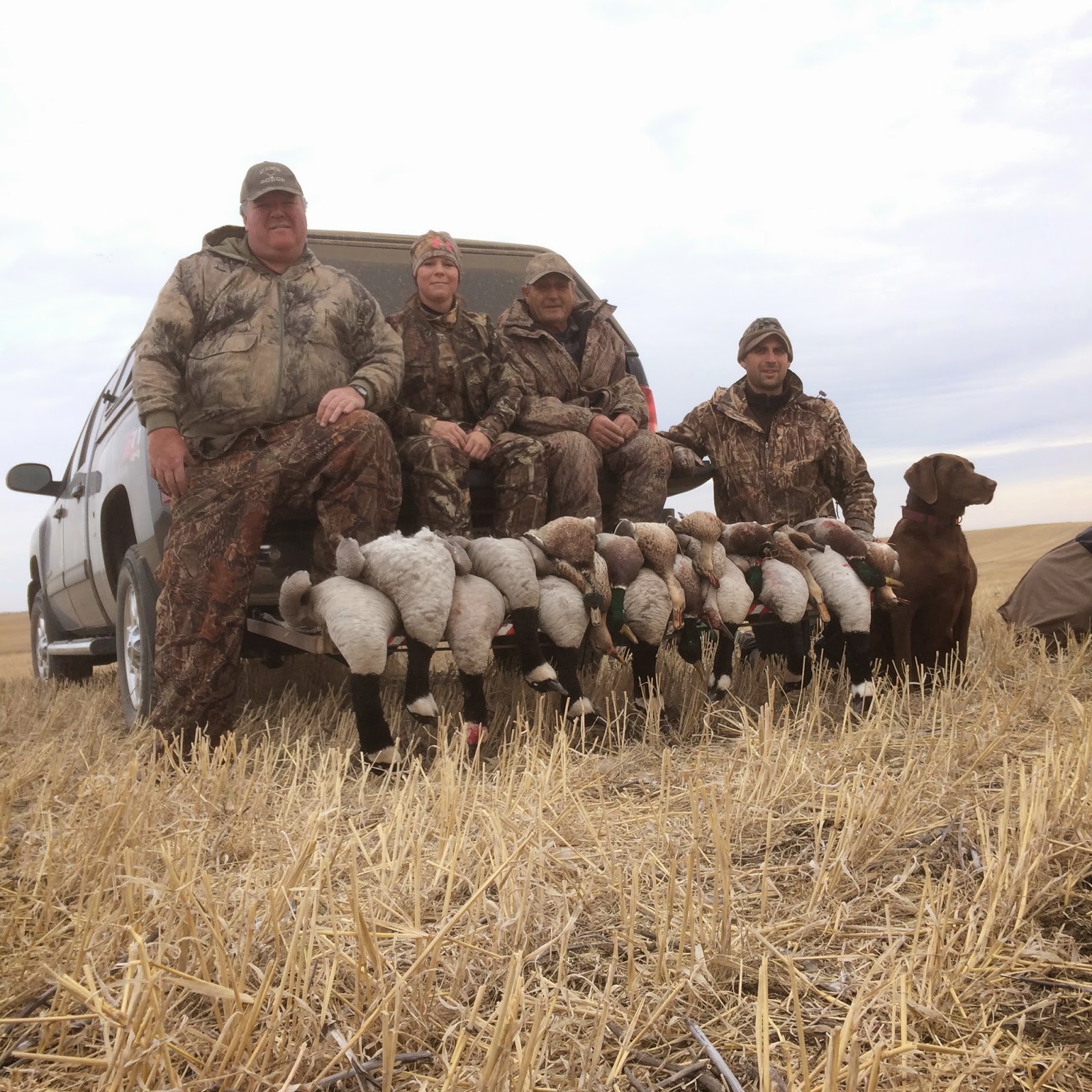 Posted by Wekusko Falls Lodge at 6:41 AM No comments:

August was a period of change here at Wekusko Falls Lodge, and a major change for myself, as the lodge lost a greeter and myself my buddy of 14 years.  Bauer, my big ol' chocolate lab, finally said it was his time, and we laid him to rest at my sister's farm at Yorkton, Sask.  He is chasing ducks and pheasants up above somewhere I am sure, just waiting for me to join him.  It will be quite different for our guests in the future not having him wandering around with those big paws.  Bauer truly was a gentle giant and we were blessed to have him watch over the lodge and the kids as long as he did.


I got this picture sent from a client. In typical Bauer fashion, only the freshest water would do! 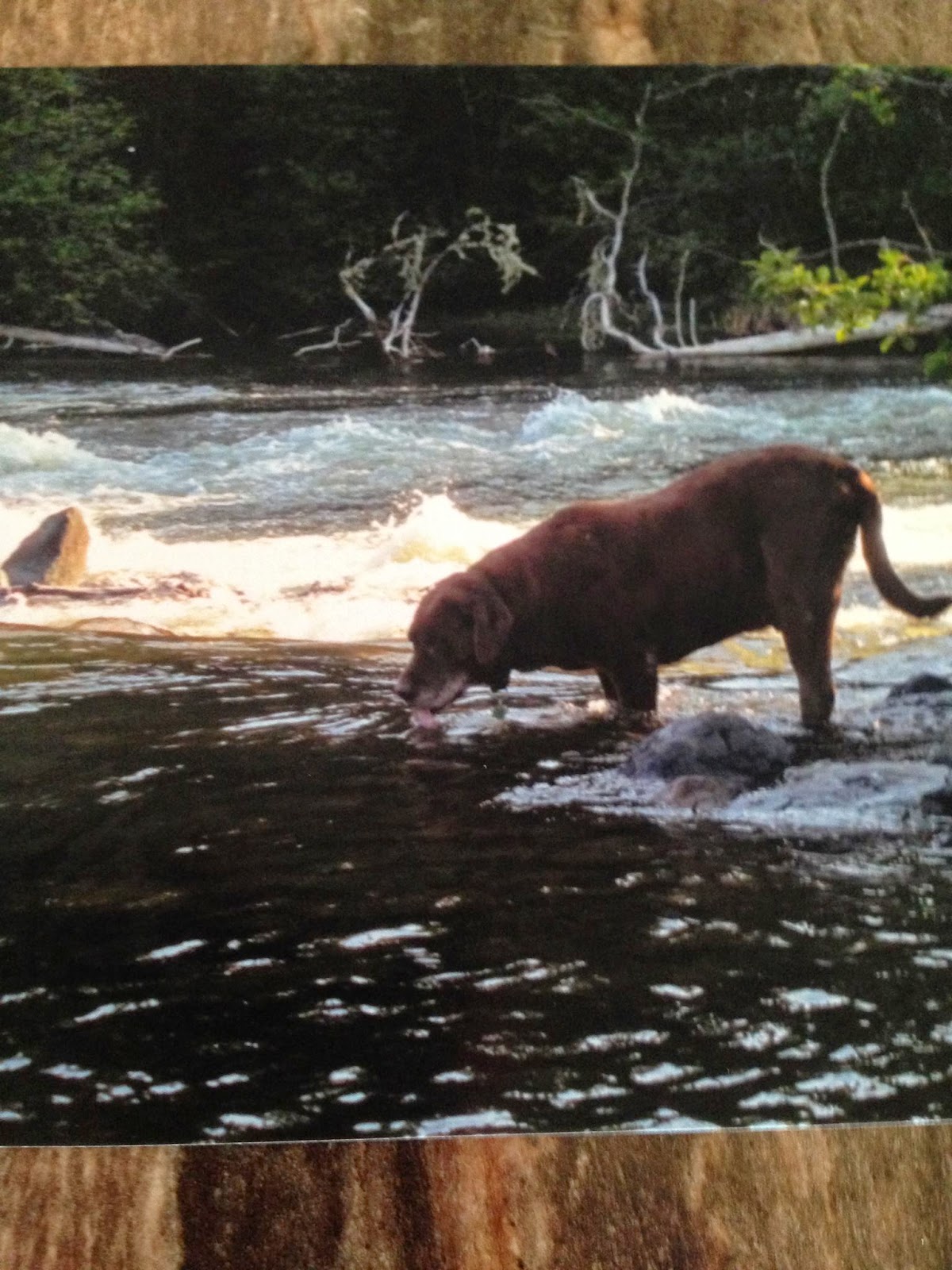 Posted by Wekusko Falls Lodge at 5:59 AM No comments:

Well what a season the 2014 open water season turned out to be.  It was one that was much different than the last 4.  We were busy just like prior seasons, but the fishing was different.  Was the fishing fantastic?  Yes it was.  Were there big fish?  There sure were.  Well what was so different.

With the very long cold winter, our ice was late....that may be an understatement.  It just plain out forgot to thaw.  Tramping Lake always opens up by mid may at the latest.  This year was May 24th!  And Wekusko Lake was June 4th!    The water was ultra ultra high, and it stayed COLD.  This really affected both the pike and walleye bites.  Pike was fantastic, as the big fish seemed to climb out of the depths for much longer than usual into the spawning areas.  And the walleye, well they were almost non existent on Tramping until July.  We did still catch big walleye in June, but our numbers were way down, and quantity of ANY walleye were way down.  In fact, because of the very slow June (compared to what we are accustomed to), our master angler walleye numbers were down by over 100 for the year.  Also, our biggest walleyes were only 31 3/4".  At least July turned on to save our numbers, and our pride.

The interesting part of the season was Wekusko Lake.  Our regular Tramping fisherman headed to Wekusko as they needed some confidence, and confidence they did receive.  Many boats landed 80+ walleye in an afternoon with most fish between 21 and 26".  And the Wekusko bite didn't quit until later in August!  It was incredible.  If there was a spot that you had never caught a fish before, you could do it last year.  It sure helped us as an outfitter, because although our monster eyes weren't on, the fun fishing was!

Our water has dropped significantly to lower than normal levels right now.  Lots of ice is forming, so next spring is anyone's guess what the bite will be.  There is only one way to know- come and try it!


The biggest walleye through camp- fishing with my buddy Josh from Ontario....31 3/4" with one hour left in his trip! 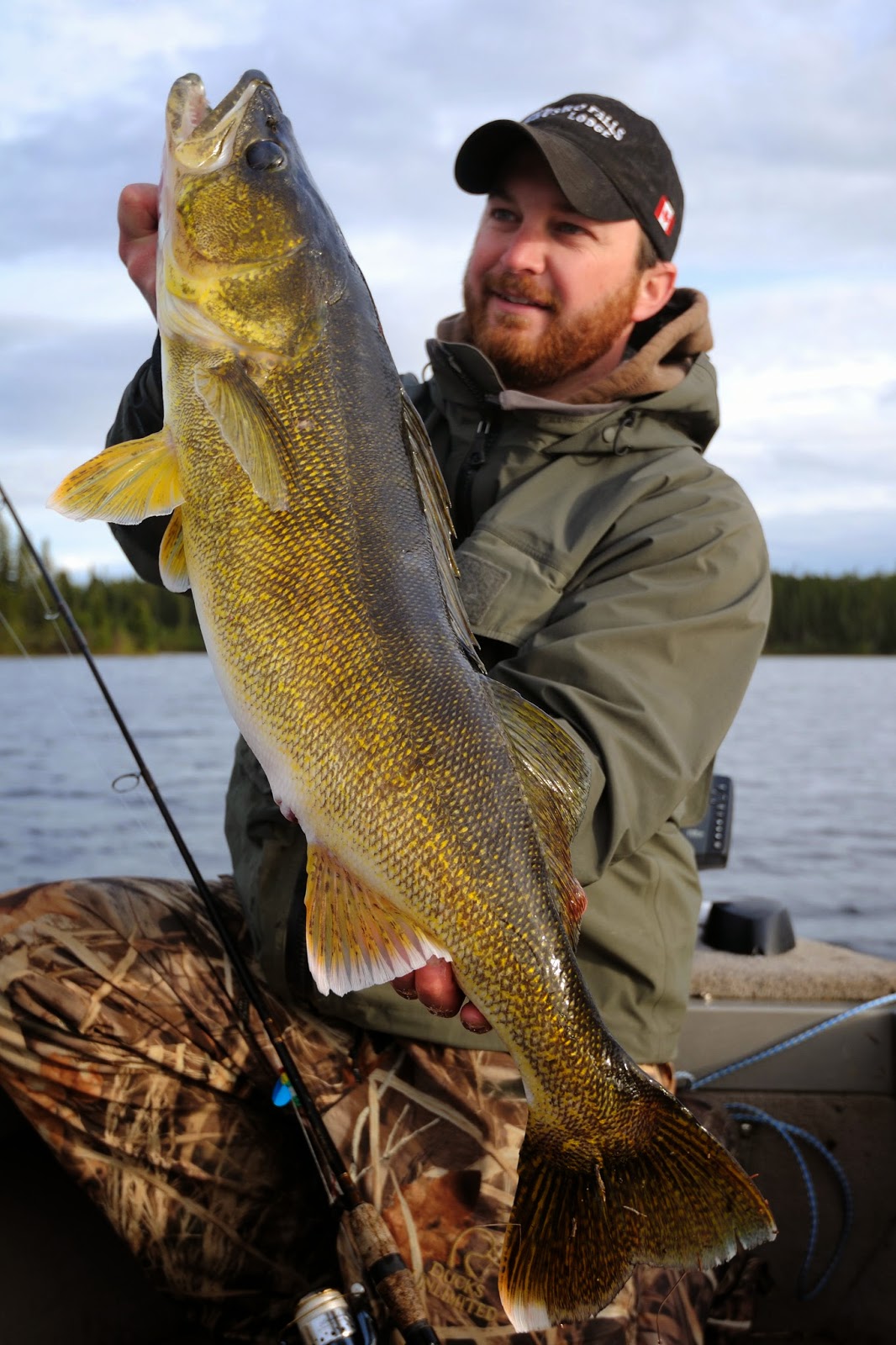 Posted by Wekusko Falls Lodge at 2:39 PM No comments:

This last spring we had the most bear hunters we have ever outfitted.  We ended up having 19 hunters, all of which tagged out.  It was an interesting spring, as the winter was a very very long one.  Feet upon feet of snow mixed with very cold temperatures, didn't allow the ice to melt off the lake very quickly, or did it allow the bears to get fully active as soon as they normally do.  However, what it did do was allow for unbelievable hides.  What we find here is generally smaller bears would start to rub earlier, but this spring all bears big to small all had thick, full, rich hair.  We also had some unbelievable colours come out of the woodwork.  Reddish chocolates seemed to be the prevalent colour, but we had major signs of blond hair at most of the baits. We also had one hunter that had shot that day, watch a 300 poundish black bear with white ear tips come and feed while he was waiting for us to come pick him up.  Our weights were averaging around 220 lbs, with the biggest touching just over the 300 pound mark.  That might not sound that great, but 2 of the bears actually went boone and crocket.  Our weights never would have been that great this spring, as the long cold winter definitely took it's toll on the their body mass and reserves.  Very very little fat if any was left on any bear.  But it seems that they did better than the previous hard winter when we had no fall berries, as bears either left or died in the dens.  Our numbers have climbed back up, and many big bears were prevalent.  Also, we had many first time bear hunters this year, and sizing a bear is very difficult, and deceiving.   But everyone had a great time, and everyone was kept safe.  And you can be sured that our scale is legitimate.

If anyone is interested in doing a bear hunt with us, now is the time to act for 2016, as we are already booked full for the 2015 season.  We are looking forward to that season, as we have established another 12 baits in areas that have never been outfitted, and we are also having a wounded warrior from Wisconsin USA come and join us for a great hunt.  We are sure next spring will be yet another full of good memories. 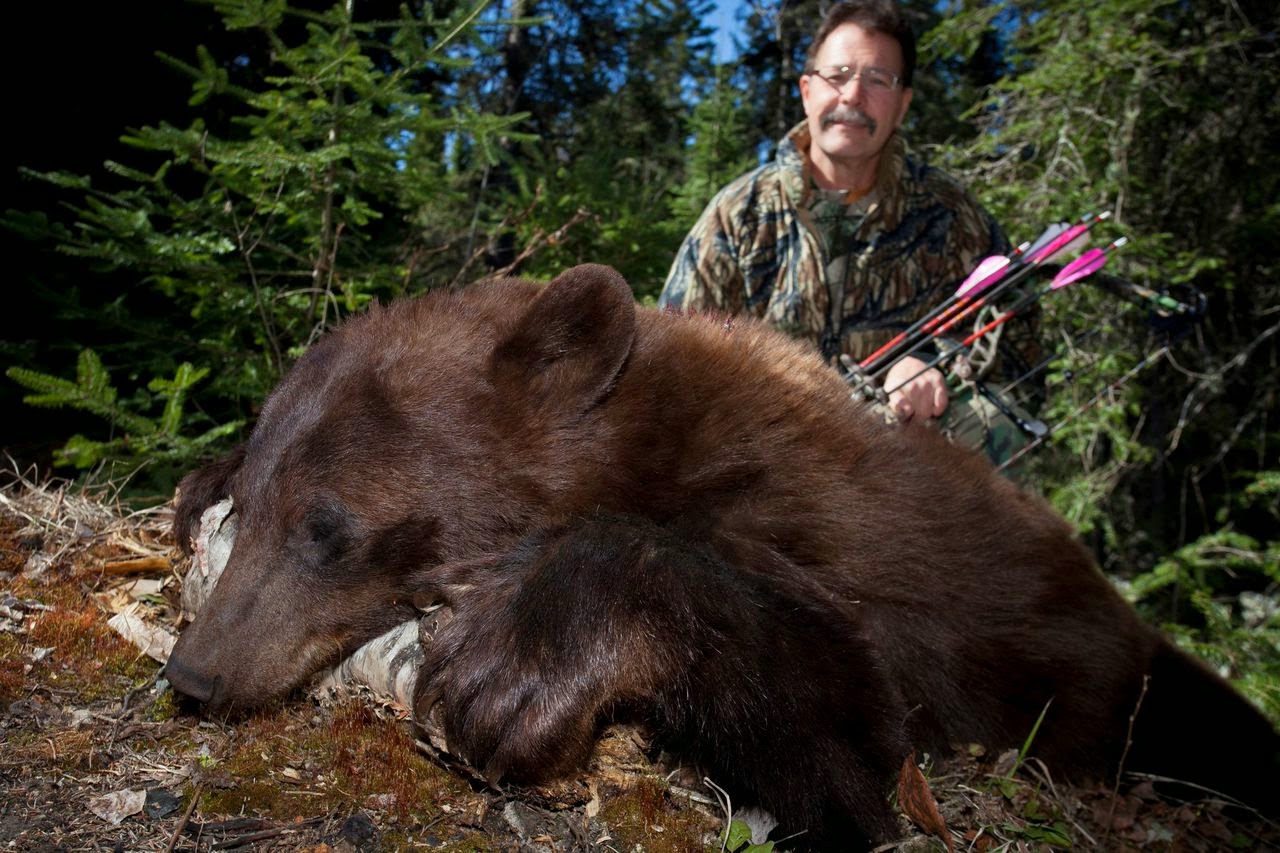 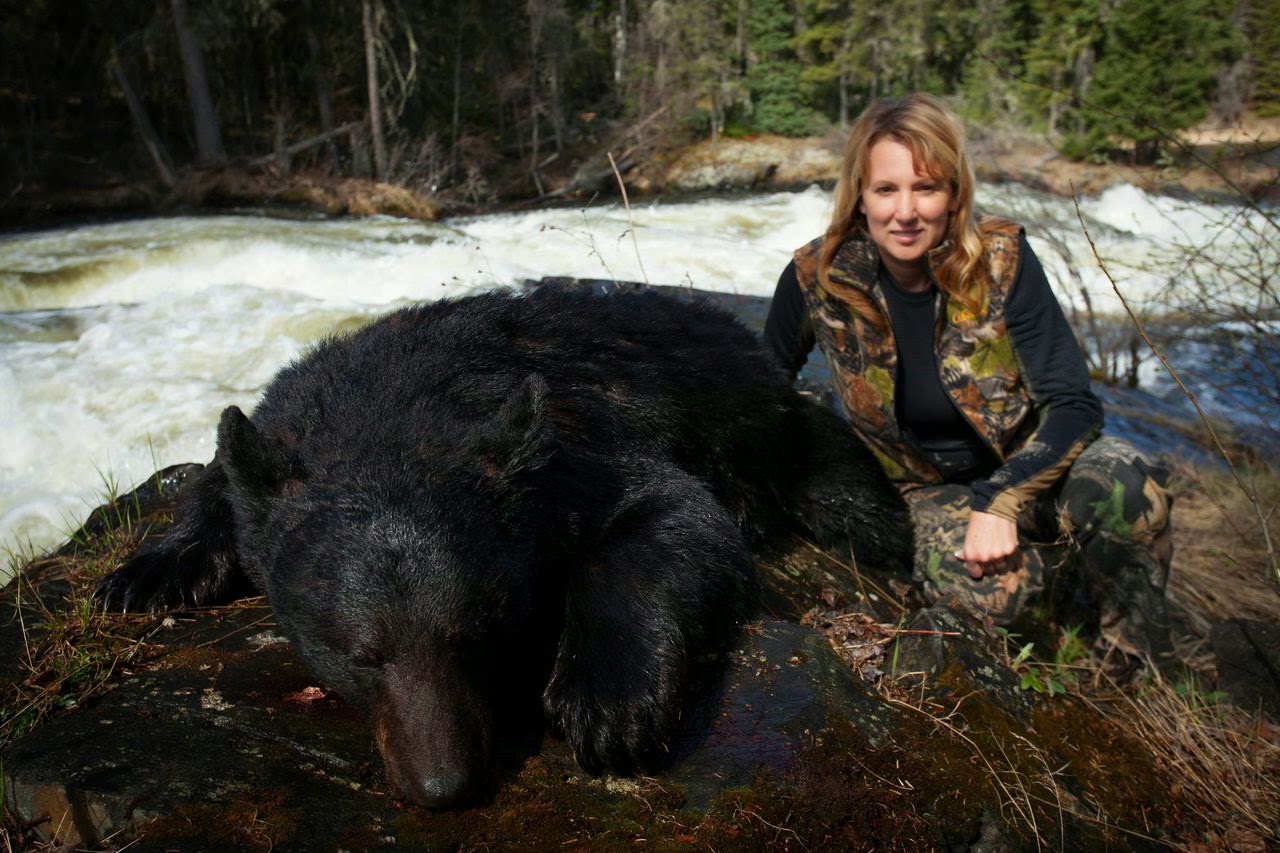 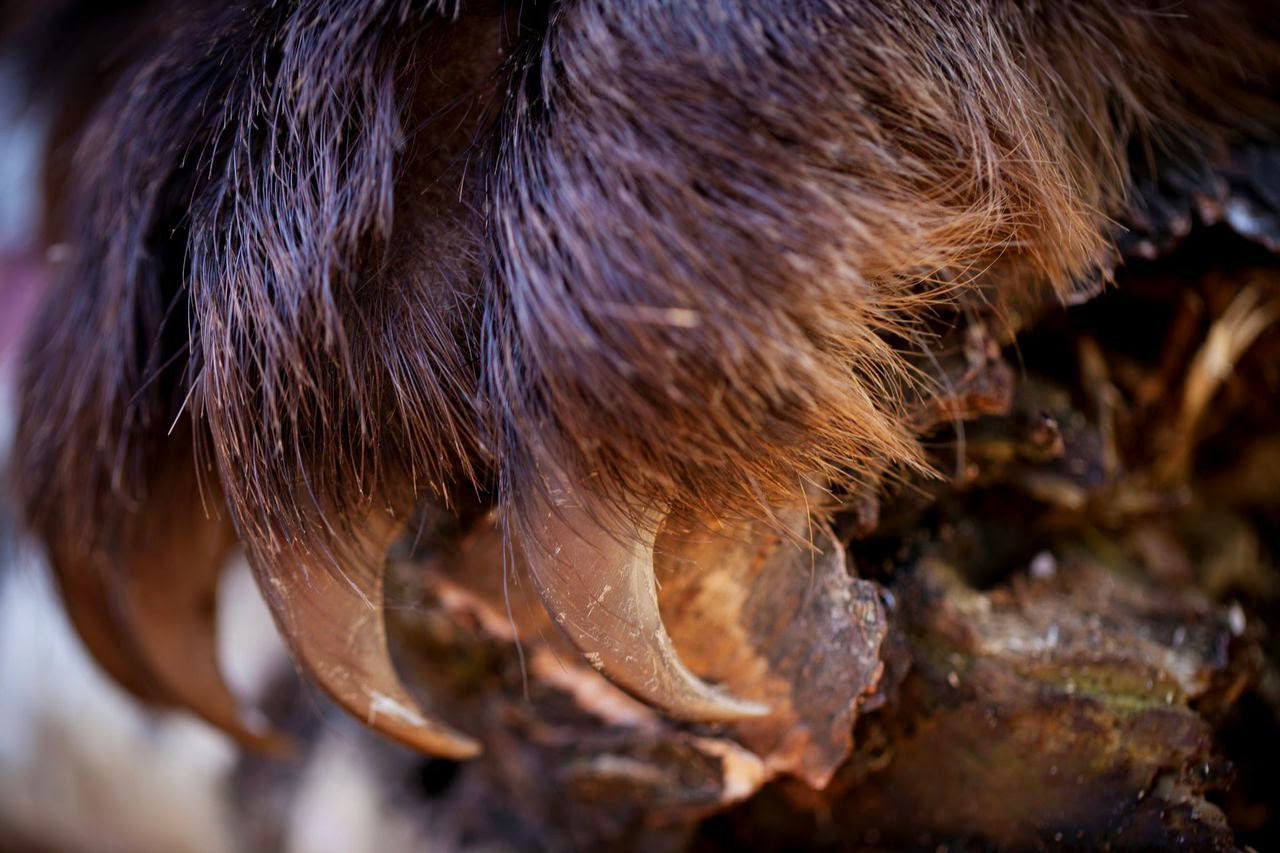 Posted by Wekusko Falls Lodge at 11:07 AM No comments: