My dad and nephew are at the camp, and we decided to hit up Korman Lake for some rainbows.  We left here at 9:30 am and fished a spot my dad and I had high success last year.  The trigger for those fish seems to be when the sun pokes out above the ridge, but it was a snowy day until 1:30.  By then the fish already slowed down.  We marked out 6 fish, and 4 fish on and landed only 1.  Not very good hook up ratio.  But the one landed was a 23 1/2".  Nice fish, well done Dad! 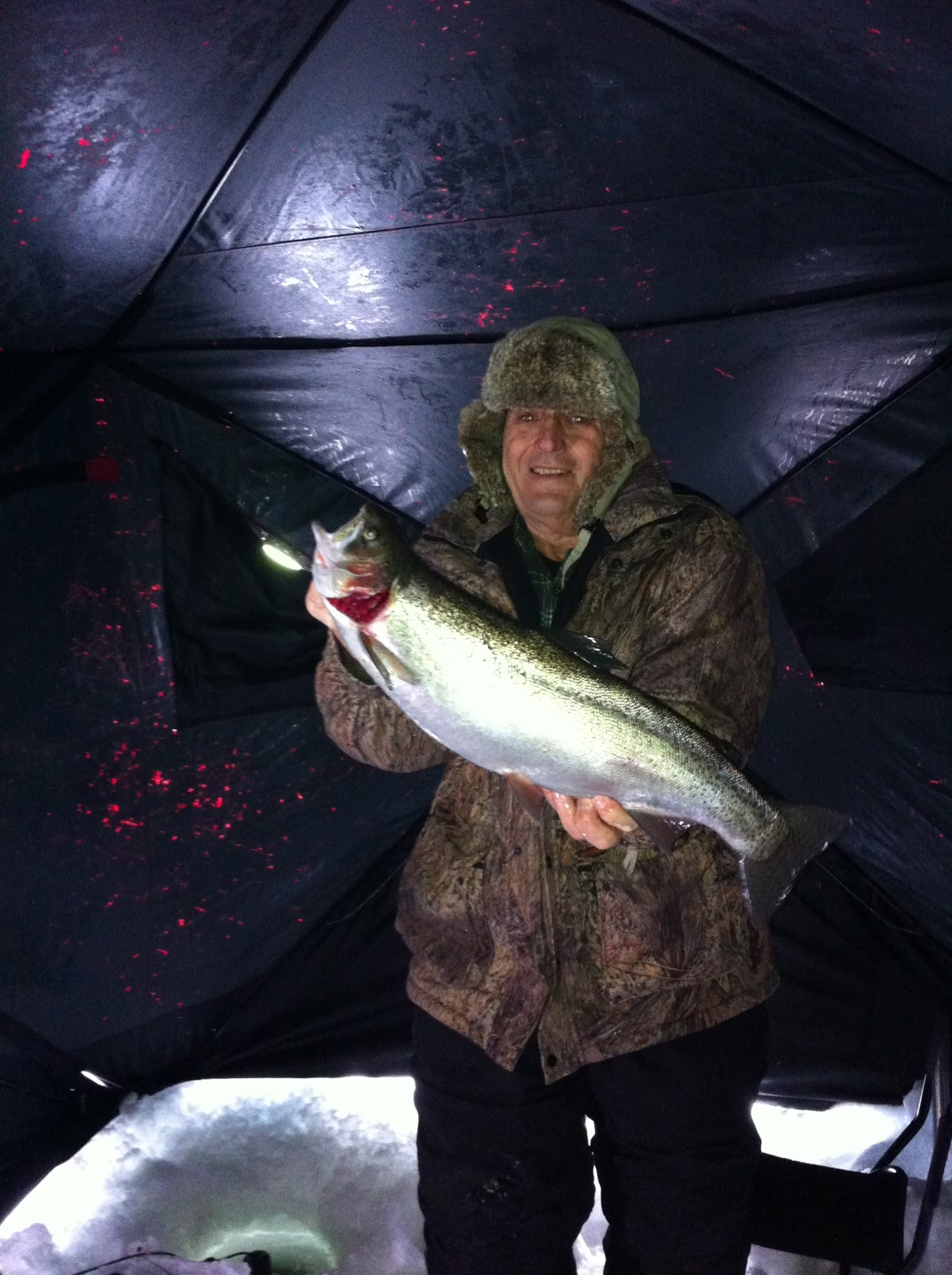 Posted by Wekusko Falls Lodge at 6:54 AM No comments:

This is just a quick update, stating what we are currently doing to help out camp and the business.  First of all, cabin 5 has been in need of a total renovation.  Unfortunately, our winter bookings (contractors) that would fund that project have been slim, so we won't be getting to change the entire cabin.  However, we decided to send some money it's way still, and renovate the bathroom.  This is our trial run, as we plan to renovate all the bathrooms in the next 3 years.  We are installing a 32" round corner shower, new toilet, and sink.  As of now I have the bathroom drywalled and painted.  Lots of work left, hoping next week to have it done.

We are also in the process of buying linens for the camp.  What a process it is.  We have tried one company, and we were less than impressed and sent everything back.  We are currently looking for a new supplier and wanting to get this done, as fishing season is just around the corner!

We also picked up a new work machine for the camp.  As we are finally building our Bear Hunting into a valued part of the business, we purchased a new work horse- a polaris Ranger.  We have had many hunters request this addition, and to stay competitive, we decided to go ahead.  It has a steel cab, tracks and wheels, and in dash heat.   The plan is to use it for ice fishing, and bear baiting and hunting,  and then once June is rolling then the cleaning staff get to use it.  We may even do some ice cream selling in the park with it.  One thing for sure is it is very versatile.

Here's a picture of shore lunch with the Ranger! 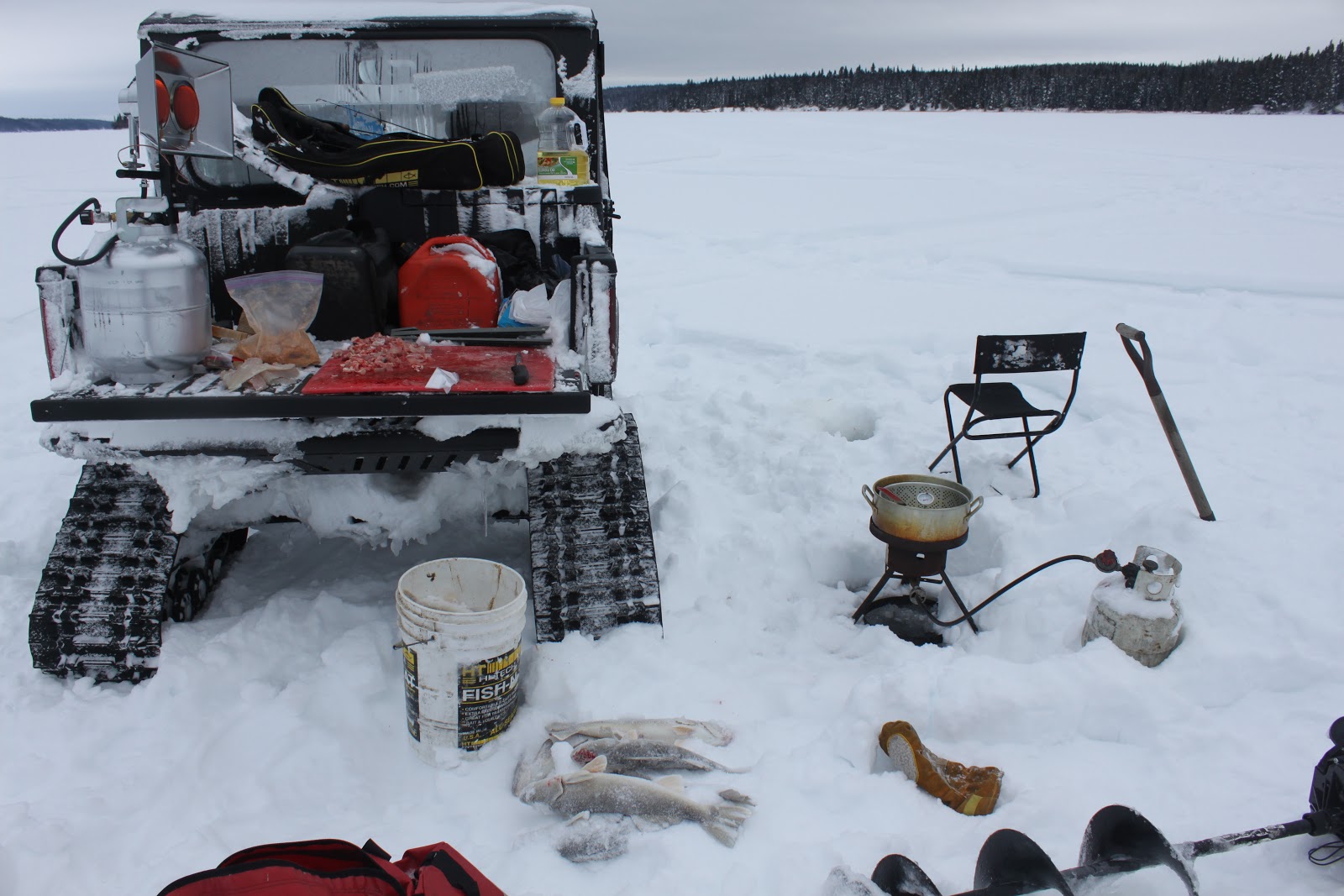 Posted by Wekusko Falls Lodge at 7:31 PM No comments:

January was a wicked one, with many days running in the -34C range.  Tough to fish in those conditions, and can be unsafe.  If something happens on the sled, miles from camp, it has potential to become nightmare.  So I like to wait when my skin doesn't freeze in seconds.

February finally broke the cold weather, and I have been out on a few outings.  My father in law came  up to the lodge, and we went and scouted out a place on Wekusko that I would be guiding later that week.  It took a few holes and gps waypoints, but we ended up finding them.  We fished for 3 hours and landed 8 walleye.  Garry (f.i.l) was on fire, and had the hot hand for a while.  Biggest walleye was 25". 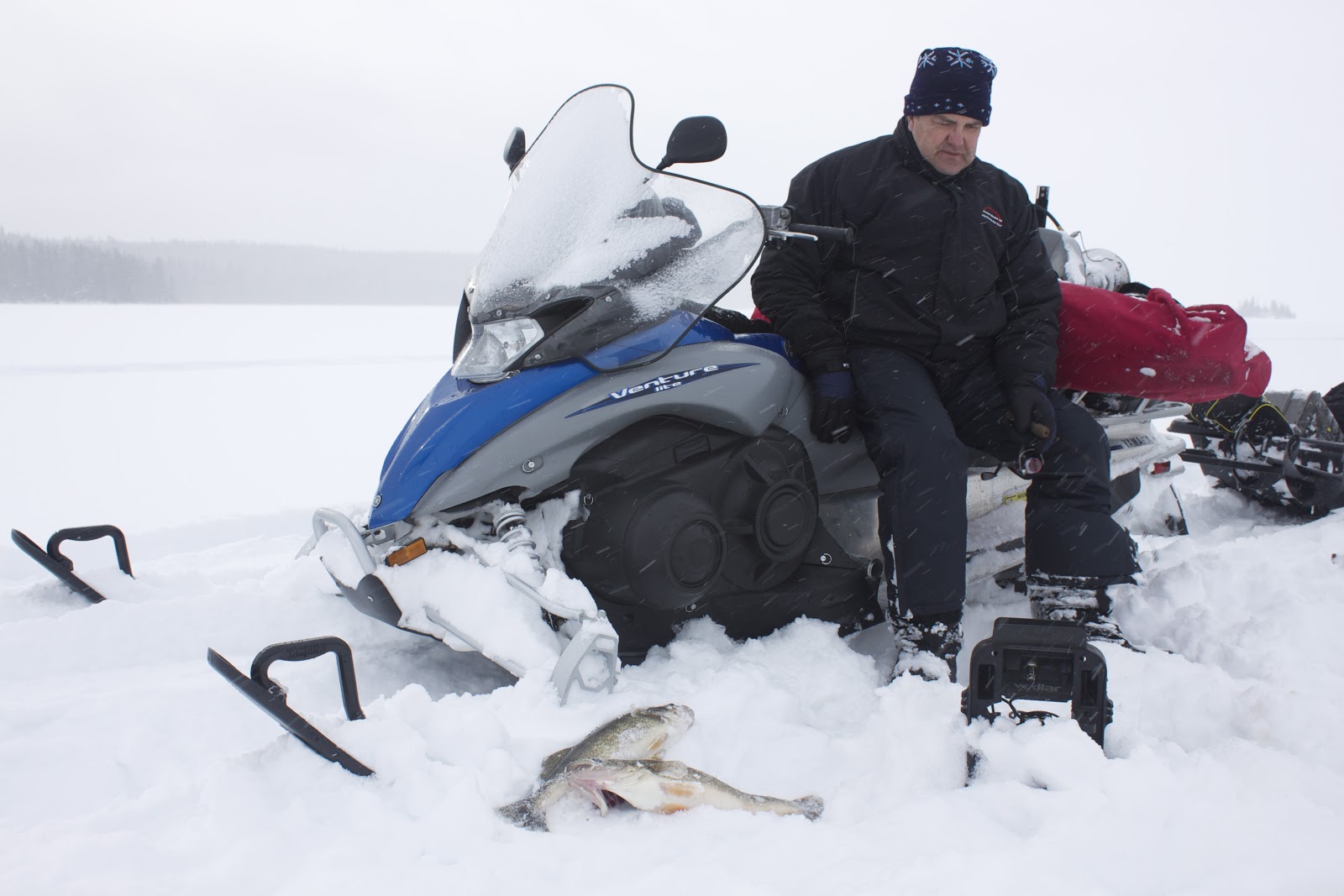 Then last weekend I guided 3 days.  We hit up Wekusko on day 1, and slammed 30 walleye.  Biggest was 26".  And there were many double headers.  Here is a pic of one of them. 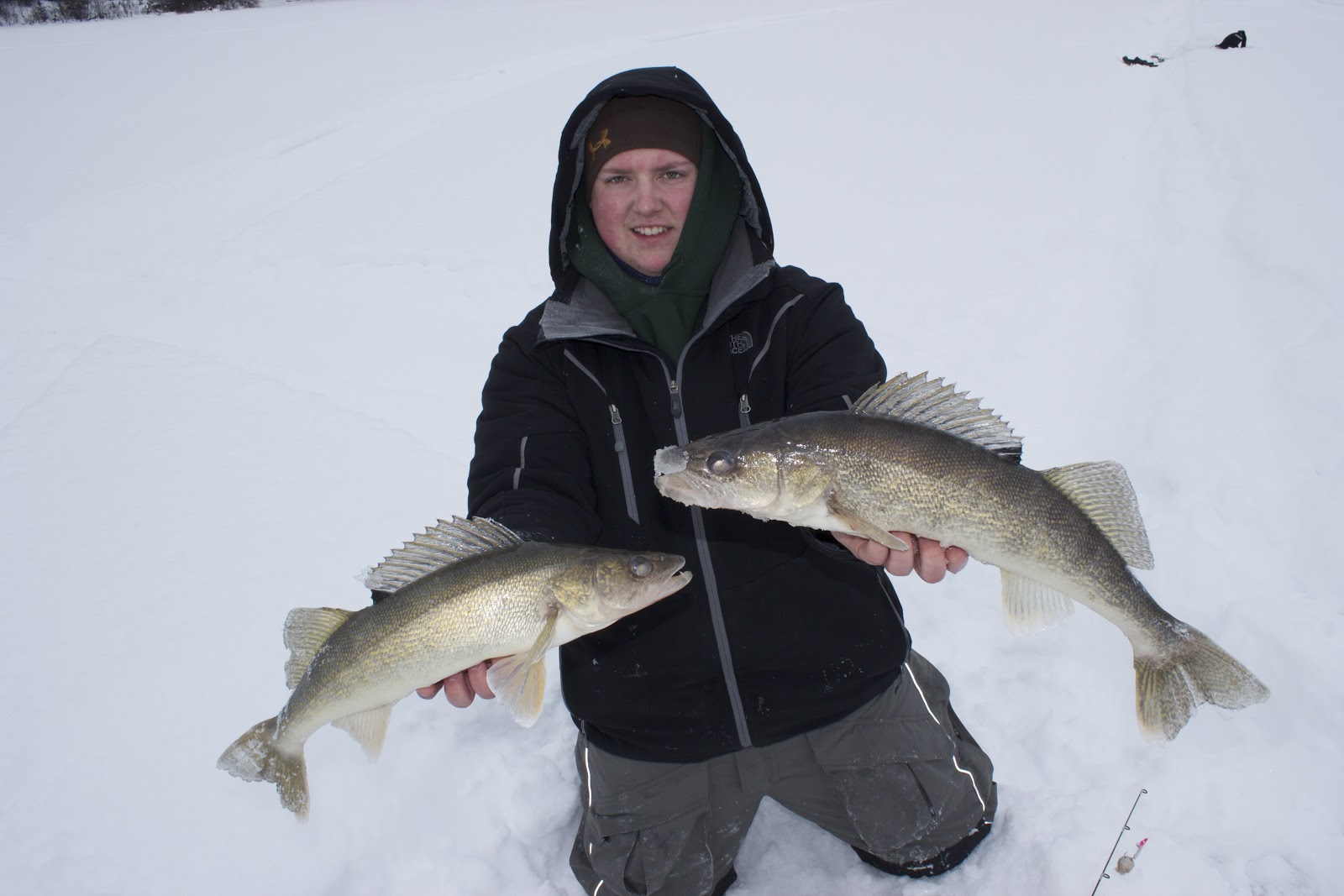 Day 2 we hit up Reed Lake.  The Ranger (see my next blog), was acting up.  By the time we got to the spot, it was already 10am, but snowing hard.  We caught only a couple right away, and then the wait began.  But a noon everything changed.  Trout were coming through hard and we landed 9, losing just as many.  33" was the biggest.We also set up for pike with tip ups for a couple hours.  We got 3 flags, and only landed one. 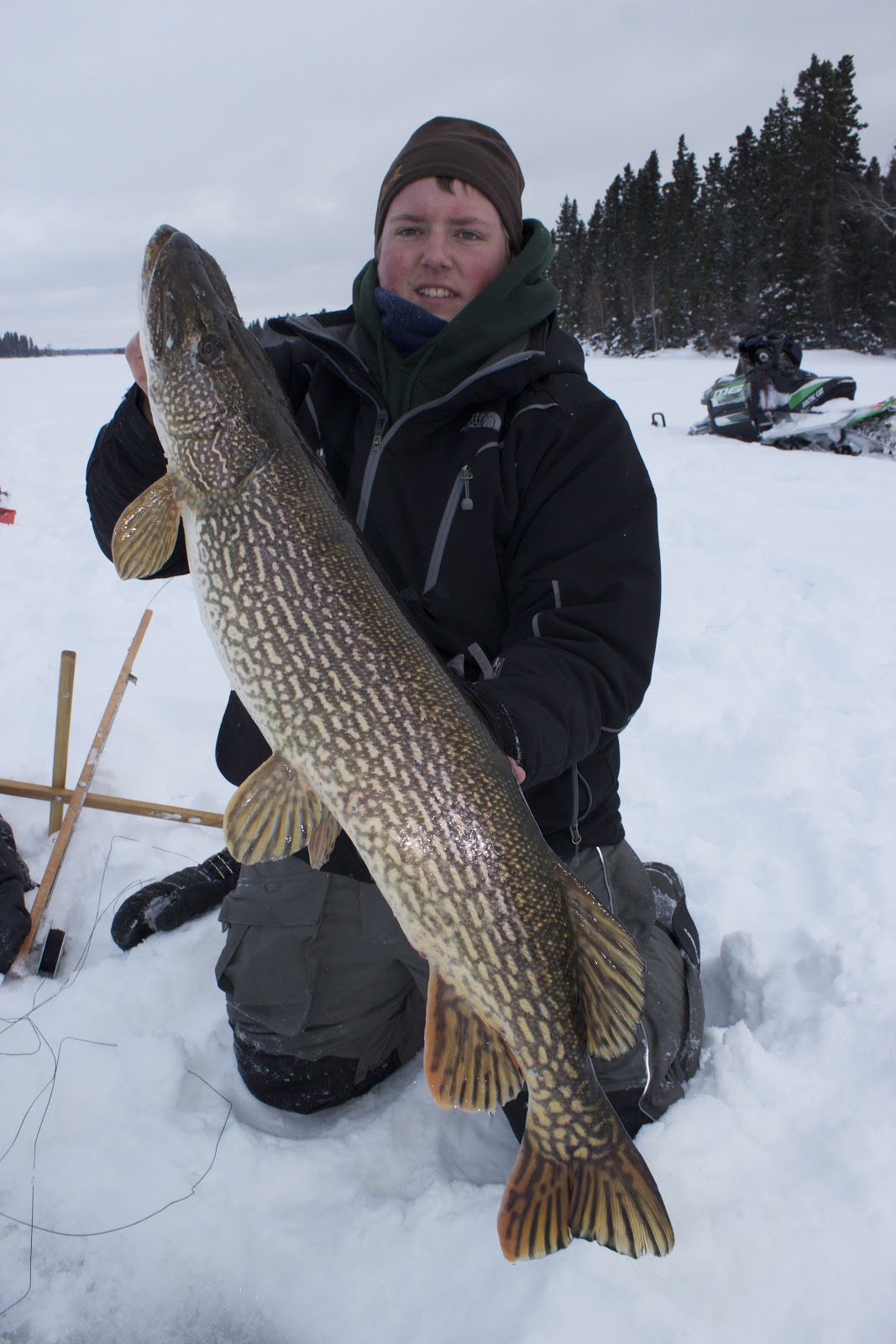 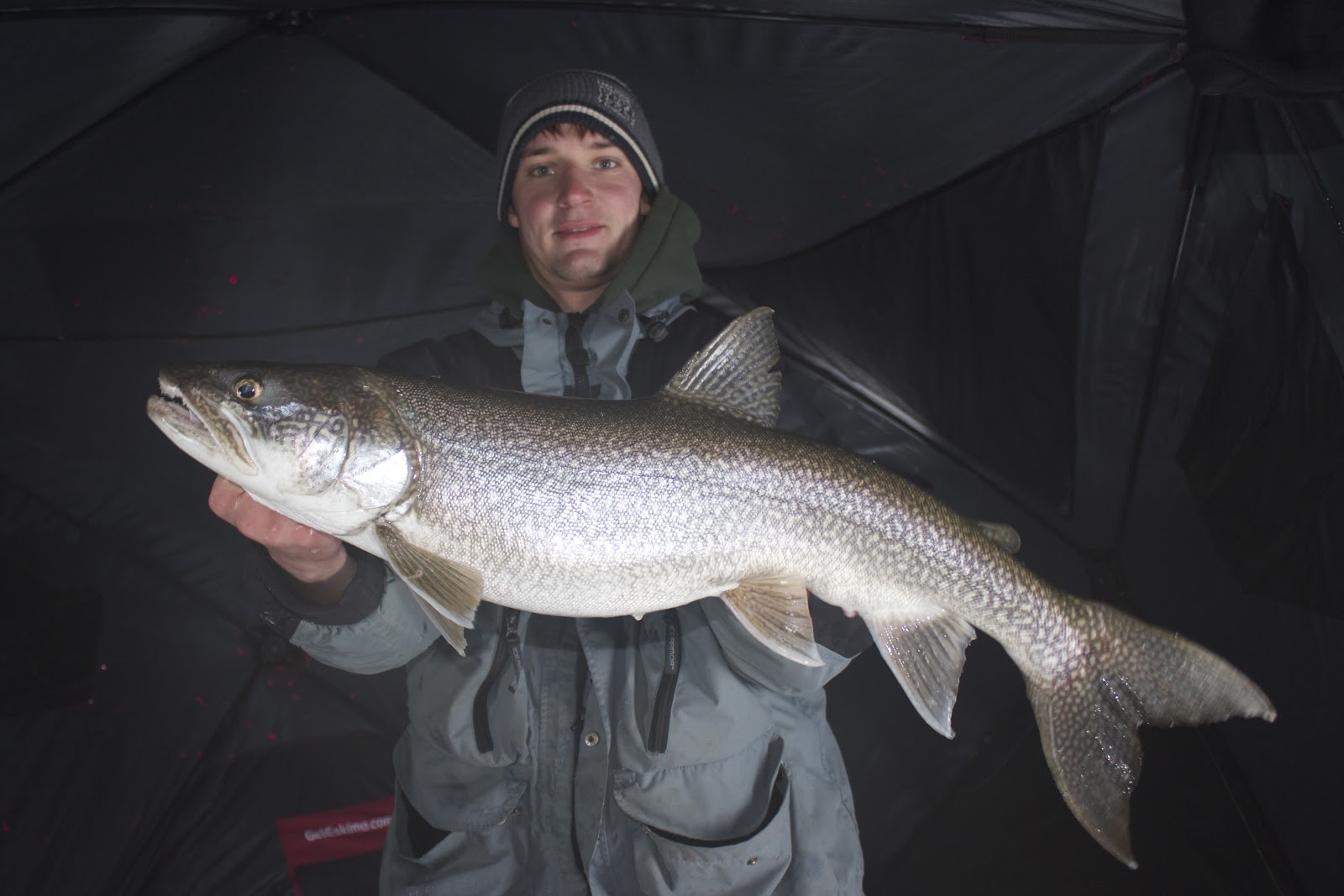 Day 3 was a bust getting stuck in slush in a backcountry lake.  So we headed to a prime Burbot spot to try and salvage the day.   6 guys fishing and in 2 hours 80 burbot, yes 80, were landed.  The biggest was a 34" brute. 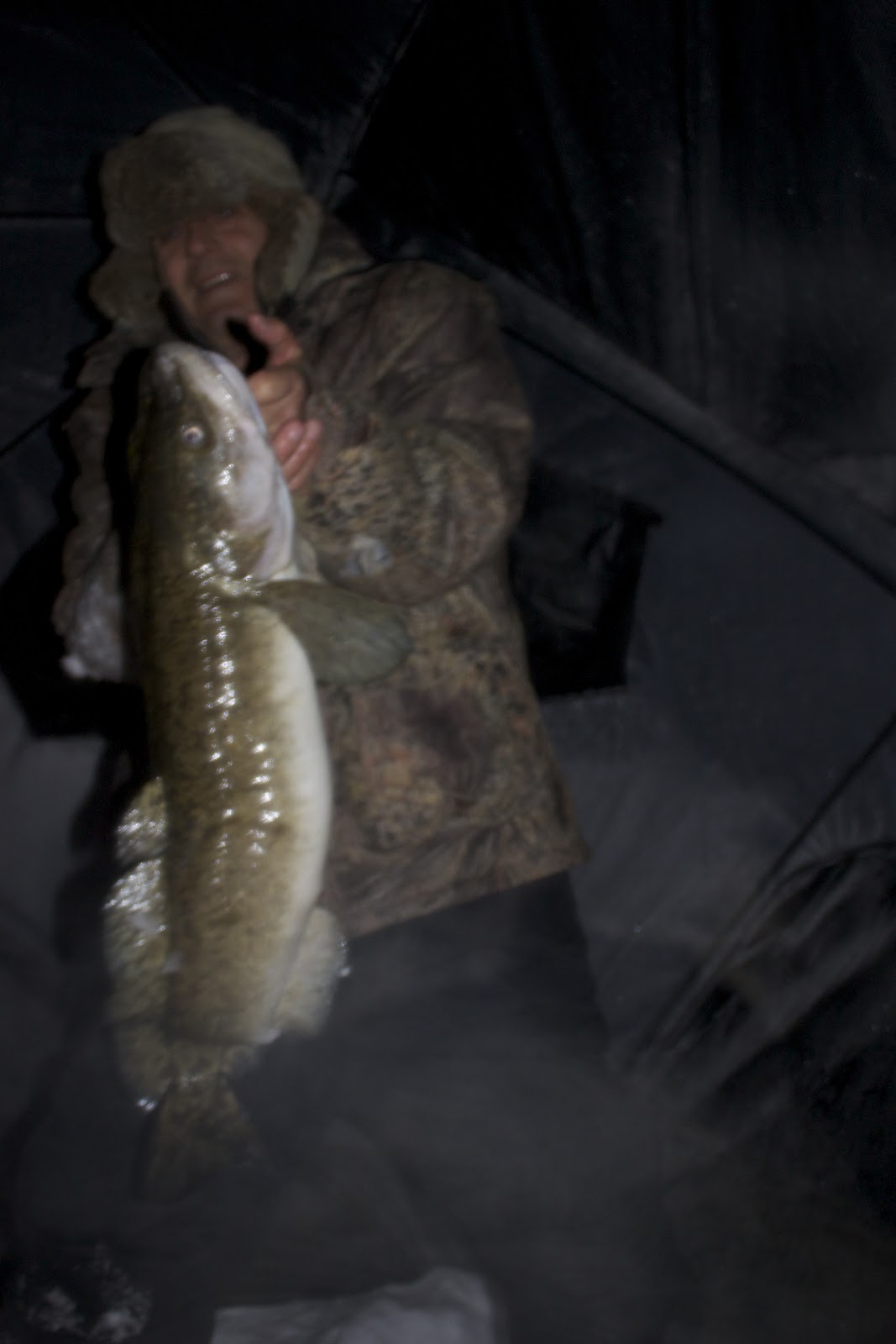 So if anyone is looking for a fun trip, think about an ice fishing expedition!
Posted by Wekusko Falls Lodge at 7:10 PM No comments: