What a crazy year 2017 was, especially when it came to open water fishing.  We had highs and lows just like every other year, but not the water level.  It was only ultra high.  The water level made things more difficult to pattern, especially for June walleye.  Water temps stayed way down, and new structure was everywhere as the water rose over the century's old high water mark.  Rocks that used to sit out of the water a large margin were just hiding beneath the surface.  Structure that used to be too shallow for walleyes were now at optimal depths.  Basically, the high water meant we had to learn the lakes again!

The high water did not stop us from having a great year for big fish.  We still managed some brutes.  Walleye numbers were crazy high, as we have a new year class of 2 year old fish that were anywhere and everywhere.  While Tramping Lake is known as a trophy fishery, it was hard to hook up on big fish as everyone was continually boating these little 15" eyes.  Many boats were landing over 100 fish a day, only problem was that 90 of them were 15".  Wekusko Lake was a different story however.  Big fish and all year classes were hitting anything and everything from the time ice left to the time ice returned.  It was wild.  A very large year class seems to be 24" walleye on Wekusko, with some unreal big fish being caught.  A verified walleye from a local angler was a 36 3/4" walleye!  That is beyond huge.   In our camp 33" walleye was the biggest, which came out of my boat while fishing with some fiends.  Always the bridesmaid, never the bride, although I did manage multiple 32" walleye in July and August, so I shouldn't complain.  The number of master angler Walleye were down this year in camp, with only hitting the 240 mark.  (walleye over 28")  This was mainly due to a slower June as our water ending up rising over our docks.  It just meant when you got into the big fish you appreciated it more! 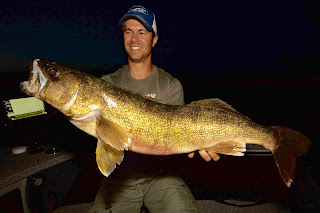 Pike started off crazy good for big fish.  With late ice a high water levels, many big pike sat in the shallows going into mid June.   Wekusko Lake is becoming a trophy pike fishery as well.  Actually more giant pike were caught in Wekusko than Tramping this year.  Once the water started to warm up, many big pike were caught in the typical cabbage areas.  Spoons and twitch baits were effective all year.  But once it turned summer, big musky baits were key to get the huge fish to hit.  The largest pike landed this summer was 46", and many many 38"+ fish ere caught.  As for master angler
(41"+) we ended up at 42, which was mostly due to the Wekusko Fishery! 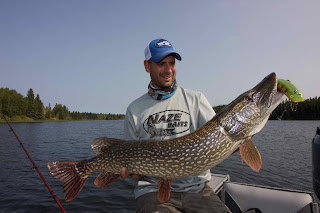 Lake Trout fishing was crazy good on Tramping this year.  With the water level high and water temps cold, the Lakers were cruising shallow all may and June.  Many fish were actually incidentals while fishing for walleye.  In june about 4 trout a day were being caught, all while fishing for walleye.  And a few really big fish were caught as well, including a 38" fish.  The amount of master angers for this year was 7.  The amount of trout caught though was astonishing, and makes me think there is more trout in there than anglers suspect.

Water levels are back to normal right now, and there isn't very much snow so far.  If this keeps up, we will have lowish water this spring, which always seems to make the big walleye a bit more ready to act aggressively.  And yes, that excites me.

www.wekuskofallslodge.com
Posted by Wekusko Falls Lodge at 5:35 AM 2 comments: