My bear guide Yoshi and I had an interesting spring.  We were rather busy baiting and setting up new  baits.  Eventually the bear hunters started coming in, and we ended up going 90% success rate.  We ended up with 2 blond bears, as well as a few over 300 lbs.  The biggest this year was 365 lbs,  but we had some true monsters on the cameras.

Not only big bears, but lots of color this year.  Going into a bait I had a great look at a 200 lb smoky sandy tan bear. It was the same color as a dark buckskin horse.  Very strange but very cool.  Hoping a hunter gets a crack at him next year.

I am looking forward to our 2013 season, where I am sure we are going to get some big bears. 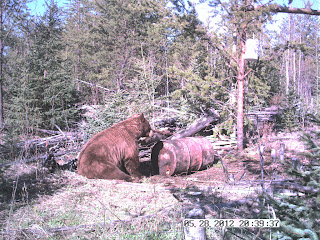 Posted by Wekusko Falls Lodge at 6:19 PM No comments:

Avery Prieb, my nephew, turned 12  a couple winters back, which allowed him to hunt in Canada.  The spring of 2011, I set up a bait that was on the outside edge of the lodges allocation, in an area no baits have been set up.  We had a monster black bear come in, but through a number of unlucky events, we were unable to close the deal on him.  We'd try again in 2012.

During the summer of 2011, I left a camera up at the bait to see what came around.  In came a tall and lanky blond bear that looked great, just needed more weight.  I irregularly baited "Av's Bait", and hoped that that blond bear remembered it for the following spring.

2012 came, and so did the baiting.  Up went the camera on Av's Bait, and sure enough, that blond bear from last year was coming in, but had a bit different coloring.  Looked exactly like a grizzly bear, and had more weight.  Expectations were high, as I phoned Avery and told him he better get his little butt up here and hunt this bear.

May Long weekend arrived and so did Avery.  My bear guide Yoshi and I went into the bait with Avery to film, and we saw absolutely nothing.  Something was wrong, and we decided maybe too many people in the stand.  So the next day, just Avery and myself went in, crossbow in his hand, and it wasn't long till we had action.

A little gaffer came in and played around, in and out of the bait a few times.  As light started fading,
I told Avery to find a comfy spot and try not to move, cause something may happen soon.  It wasn't long, and the little guy looked up and ran off.  Show time?

Sure enough, in comes "Grizz" with a sow, and he was weary.  The sow he was with went straight to the bait and started eating.  Grizz checked us out keeping away from any shooting lane.  Avery held it together, and after a few minutes, the moment Avery waited 2 years for finally came.

I have never seen a 13 year old with such big eyes in my life.  For a kid that plays johnny too cool, he could barely hold it together.  But then again, neither could I.  I am not sure who was more excited, or more proud. 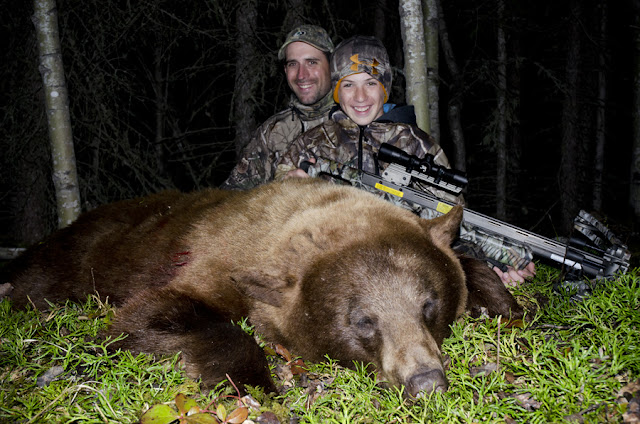 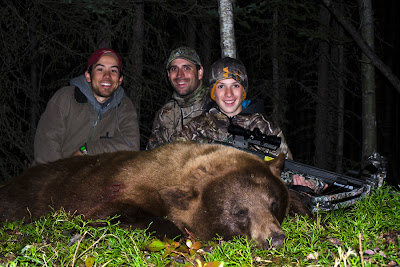 Words are hard to explain just what Avery and I were feeling.  But as we settled down and everything sank in, Yoshi said it best on the way home with the bear. " You did good Avery, you did good."
Posted by Wekusko Falls Lodge at 5:37 PM No comments:

Well here I am in August, getting caught up with a few things.  Like writing about ice fishing...... hmmmm.   Perhaps baby Kiley has life a bit busier than the past.

Anyhow, the tail end of ice fishing was a blast.  We had some interesting excursions, one of which involved a bunch of farmers from south manitoba, 8 quads, a few sink holes, a whole lot of slush, and fishing when we finally could make it.

The fishing was strong, lots of numbers, but bigger fish were harder to come by as the season progressed, which is generally not the norm.   My laker spot on Reed slowed down by the end of March, and walleye on Wekusko stayed strong.  Korman really really got tough for me anyway, catch a couple a trip, but nothing like mid winter.  One fishery that stayed strong all year was Woosey lake for walleye and especially Burbot.  Alot of masters came out of the ice there, and those 30"+ burbs sure do fight!

Funny thing is, from now it is only 3 more months until the ice auger cuts another hole, or hundred.  Till November sometime........ 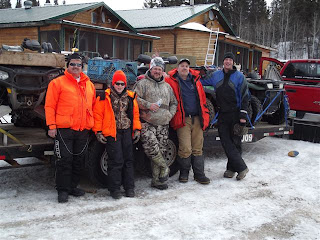 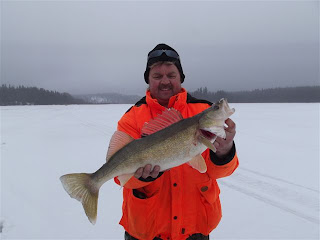 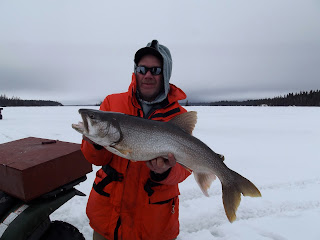 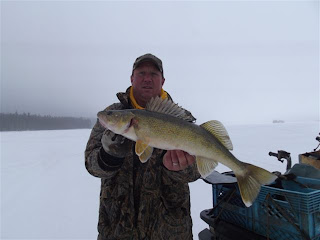 Posted by Wekusko Falls Lodge at 3:47 PM No comments: