This last ice fishing season was incredible, with big fish being caught right from the get go.  We had success for the big 4 - pike, walleye, lakers, and burbot!  Our biggest fish through the ice this year:
Pike - 48",  Walleye 29 1/2" (which was disappointing), Lake Trout 39", and Burbot 36".

It was a learning curve for me guiding since the water was a full 2 feet low, meaning many structural areas had changed.  I love the challenge (most days), but I may have turned a bit more bald in the process of figuring these fish out!

The ice was sketchy to say the least for much of April, which ended our guiding season early.  There were some in the area that pushed it right till the end of the season, but safety for both my clients and myself (I want to see my wife and kids each night) had me make the call to end it earlier than expected.  There was a time in my life that I wouldn't even have questioned it, but as a person gets older and has more responsibility things start to change.  If I ever have to question the integrity of the ice, then I hang up the auger for another year, or find another body of water that is safe.  This is where a guide that knows what they are doing is worth more than people think.  As I was on the ice for 40 days straight, I was able to see how the ice candled and honey combed each day, and how much ice was good ice versus rotten ice.  It is amazing how fast one rain can ruin solid blue ice.  Just ask the fellow that put his truck in reed lake just a few days after I called it quits!

If anyone is thinking about ice fishing next year- do some research and then head out!  It can be WAY MORE FUN than you think!  And a warning- more addictive than you think as well! 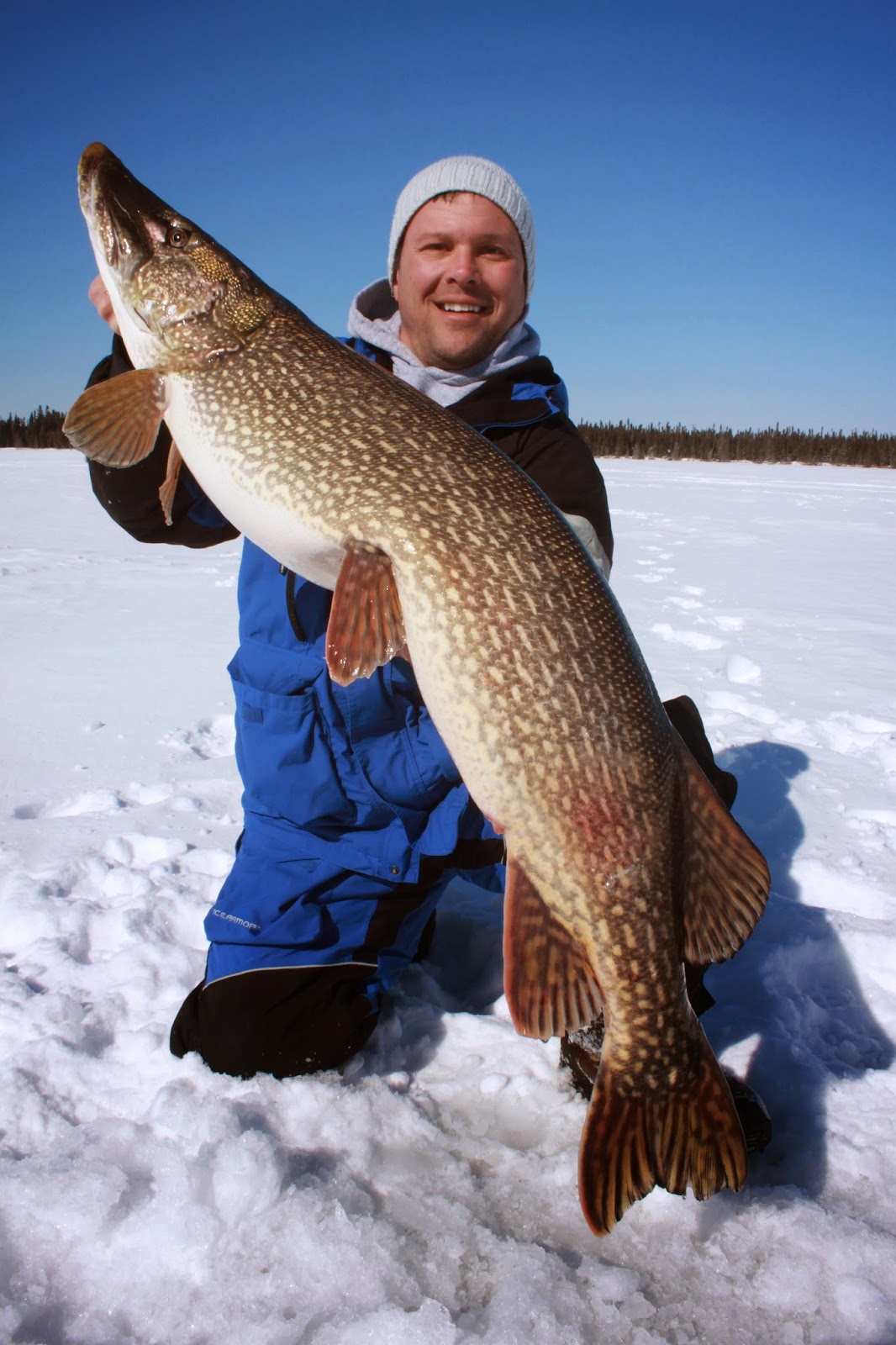 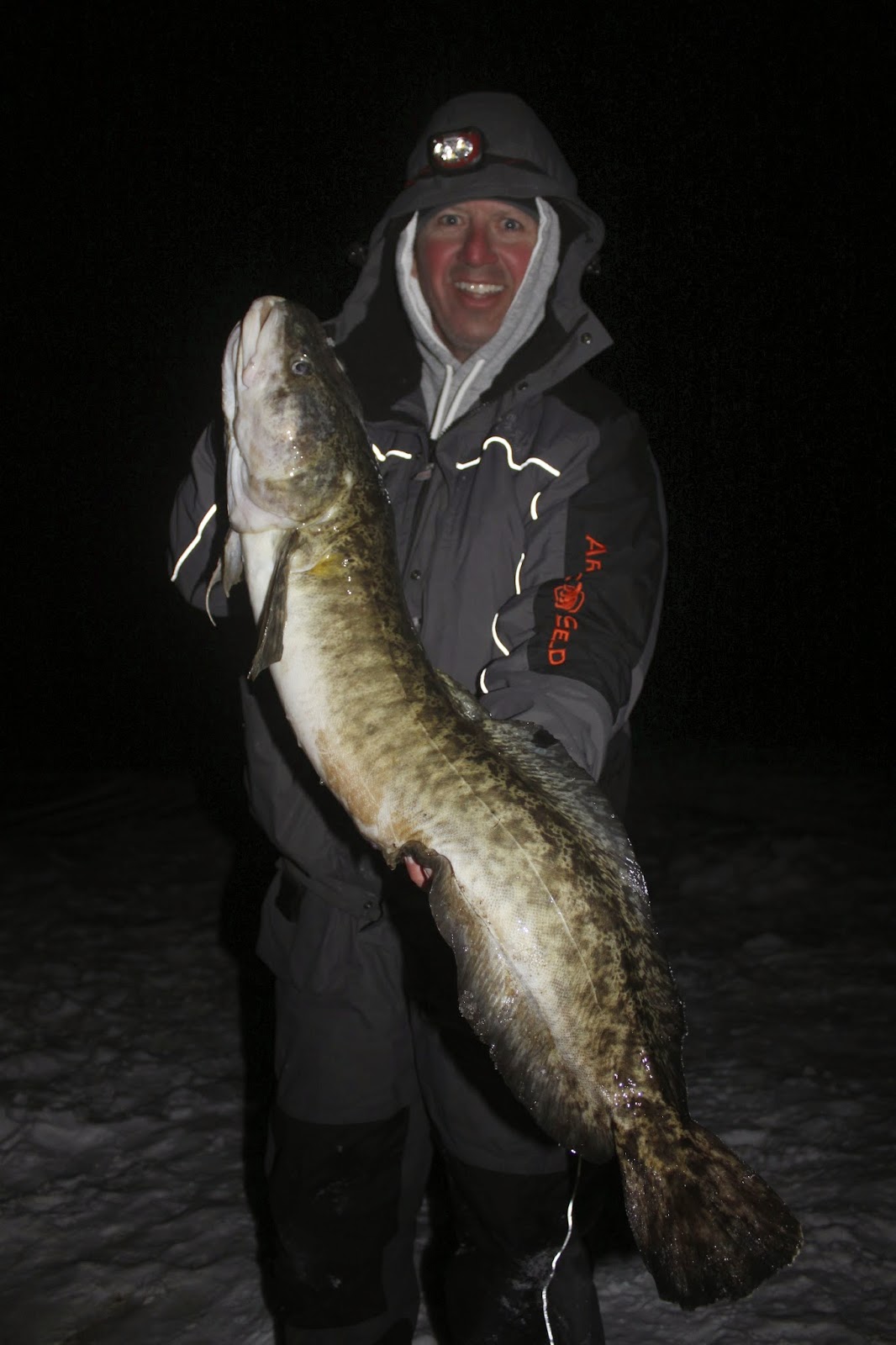 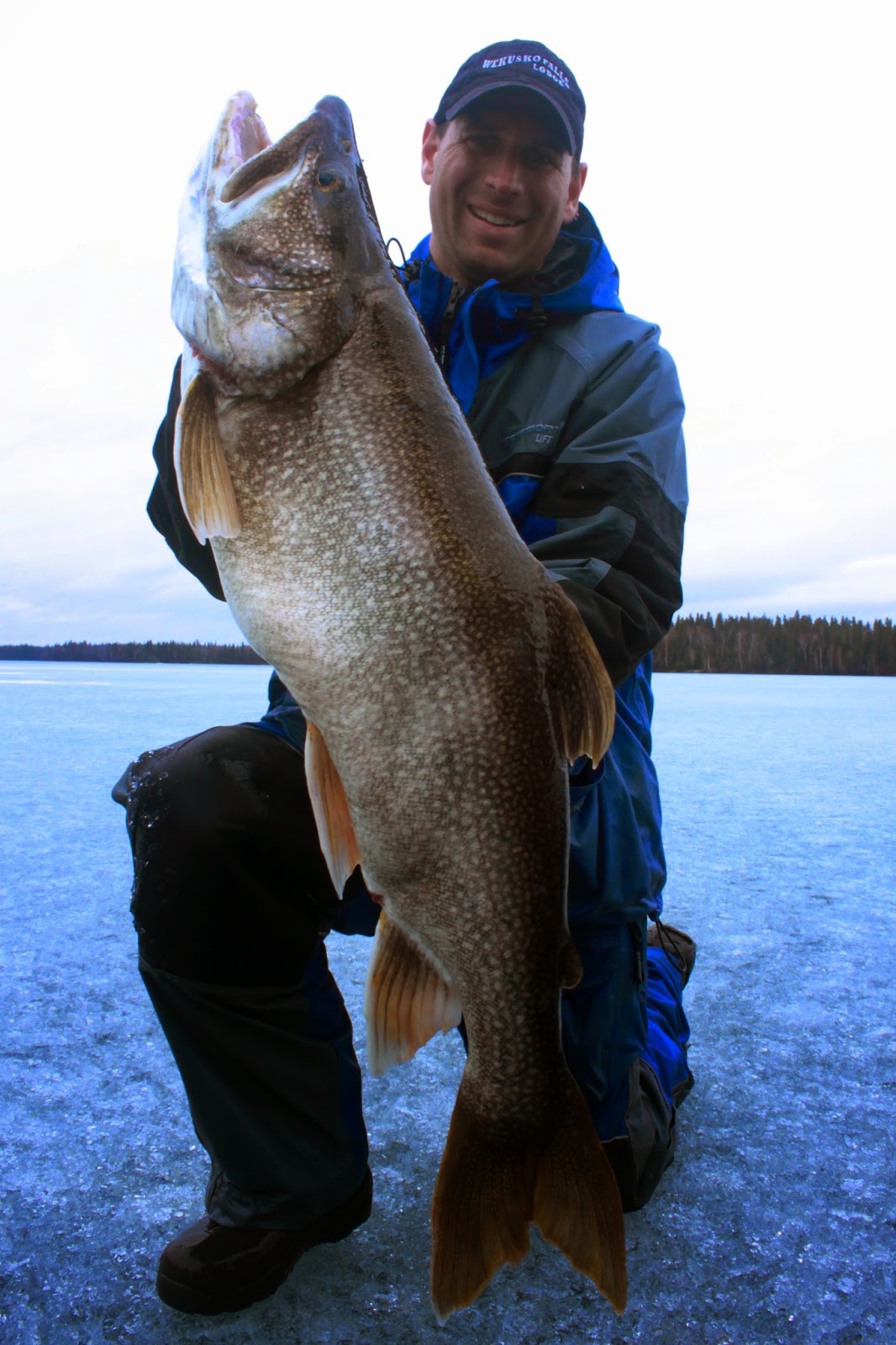 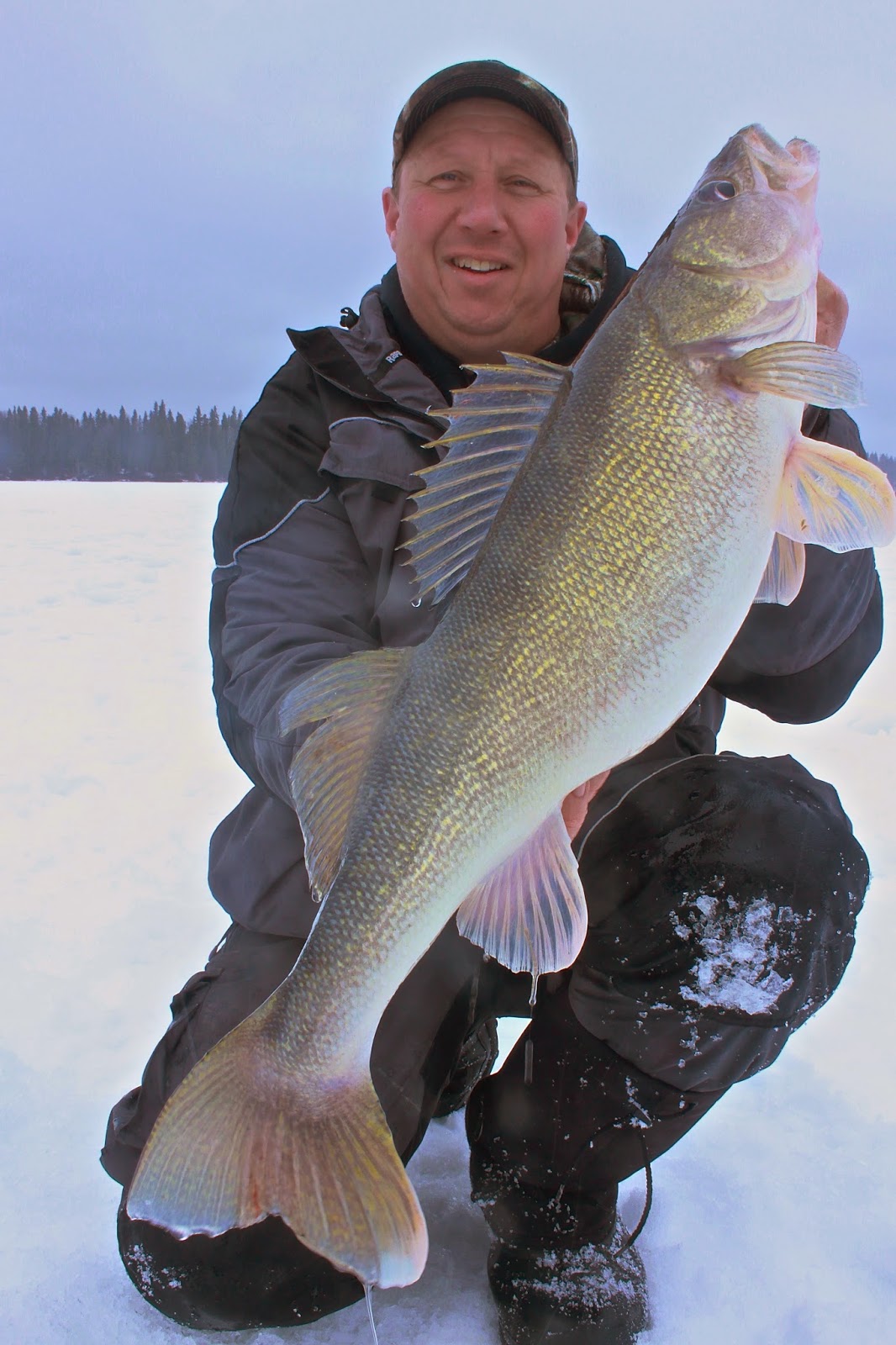 Posted by Wekusko Falls Lodge at 6:39 PM No comments:

This winter has been an unreal windy cold season.  Especially February.  With low water and these crazy temperatures, the falls have been making some very unique ice abnormalities.   It also came close to freezing the whole upper falls over!  Now it has receded and made an ice blockade right across the bottom of the falls.  And like usual, the lower falls is frozen right over, and not much open water below.  I did however, see something that had me thinking otters were making a special house......but then upon pondering...... the water is pushing foam out of the only spot it can.  This is the only time of year you see stuff like this! 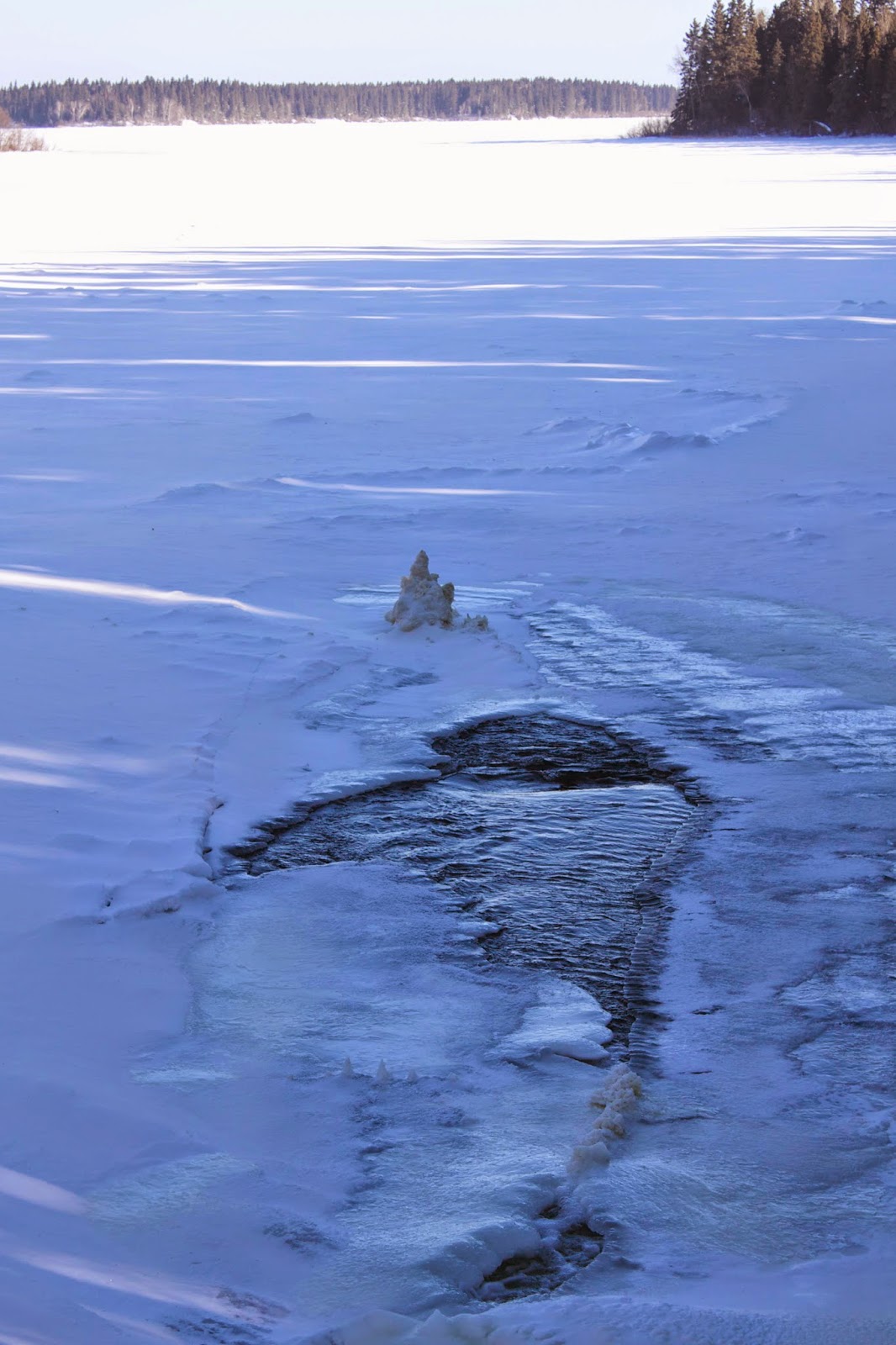 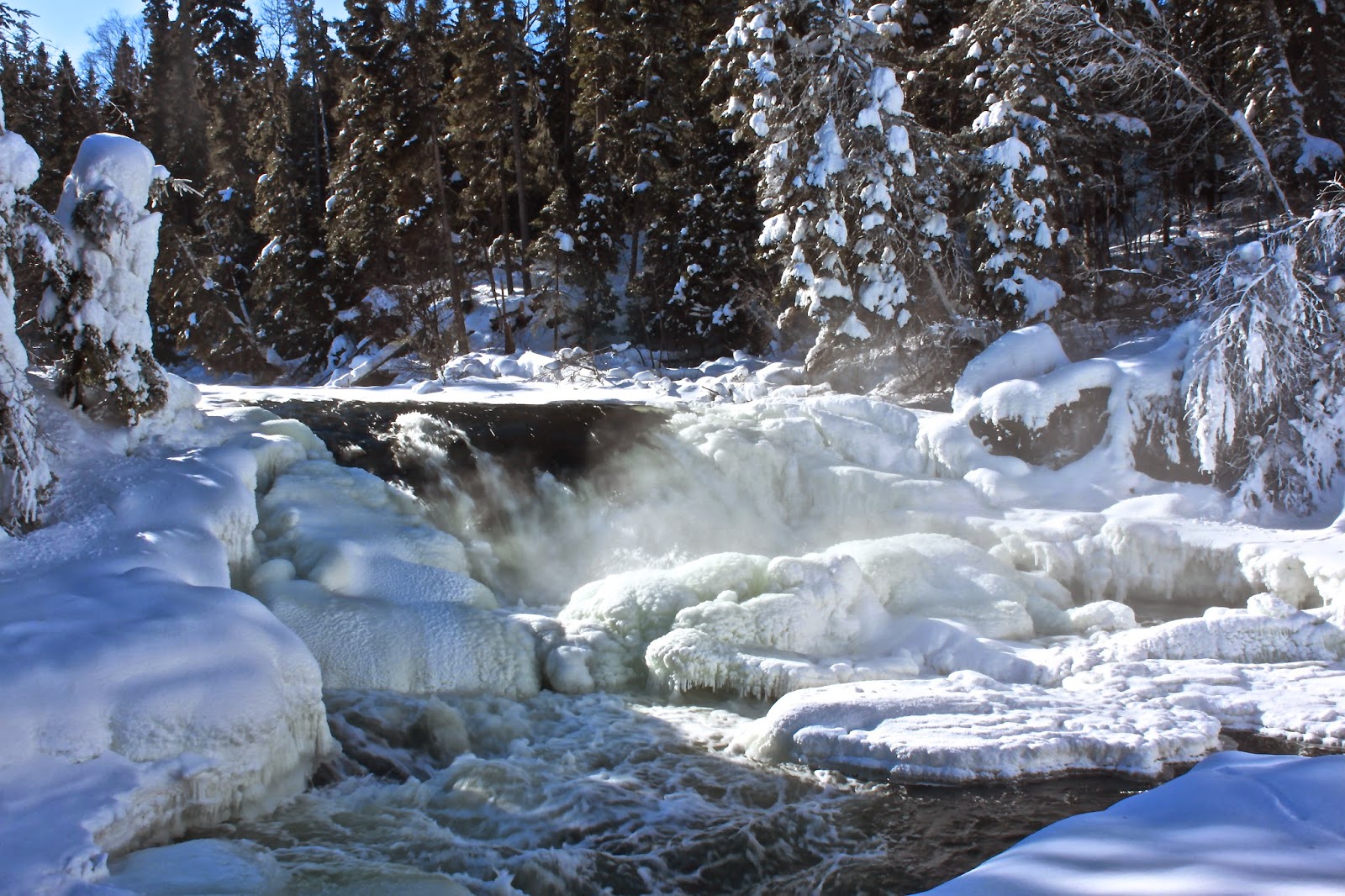 Posted by Wekusko Falls Lodge at 3:47 PM No comments:

Well it's that time of year where we are covered in snow and ice.  Most people get scared of the cold, and would rather sit inside watching T.V. instead of braving the elements.  I love ice fishing, but with family, business, and the new cabin, I am stretched pretty thin.  BUT a good friend and client emailed wondering if he should come up the next day, and I jumped on the opportunity to get out on the frozen landscape.

Ice has been great this year, although not super thick.  And snow is about one foot, which is making lake travel great.  Much better than dealing with all the snow, slush, and hard drifts of the last two years.

We ended up fishing three lakes- Wekusko, Reed, and Kormans.

We did well on Wekusko- landing about 35 walleye, nothing over 26" though.  It was a battle finding the fish at first, but we finally succeeded, and made the day worth it.

The second day we went scouting on Reed, as we tried some new structure I found this summer.  It didn't take a minute and we had our first laker on.  We ended up landing 17 trout, and losing many as well, but managed a couple of beauties!  Unfortunately, we listened to the weather report, and didn't come prepared for the gale winds and the cold.  We retreated to the shelter of one of my favorite pike bays, and hit an awesome late evening bite.  We ended up landing 3 pike over 40", and lost some real bruisers too.  What a day.

The last day was colder, and we headed to Kormans to try our hand at some big rainbows or brookies.  We did find trout- 12 of them....but nothing over 15".  Half were brookies.  This fishery will be amazing in a couple years.  Those fish will only grow, and then look out!

And who said the fish don't bite mid-winter? Not ME!!! 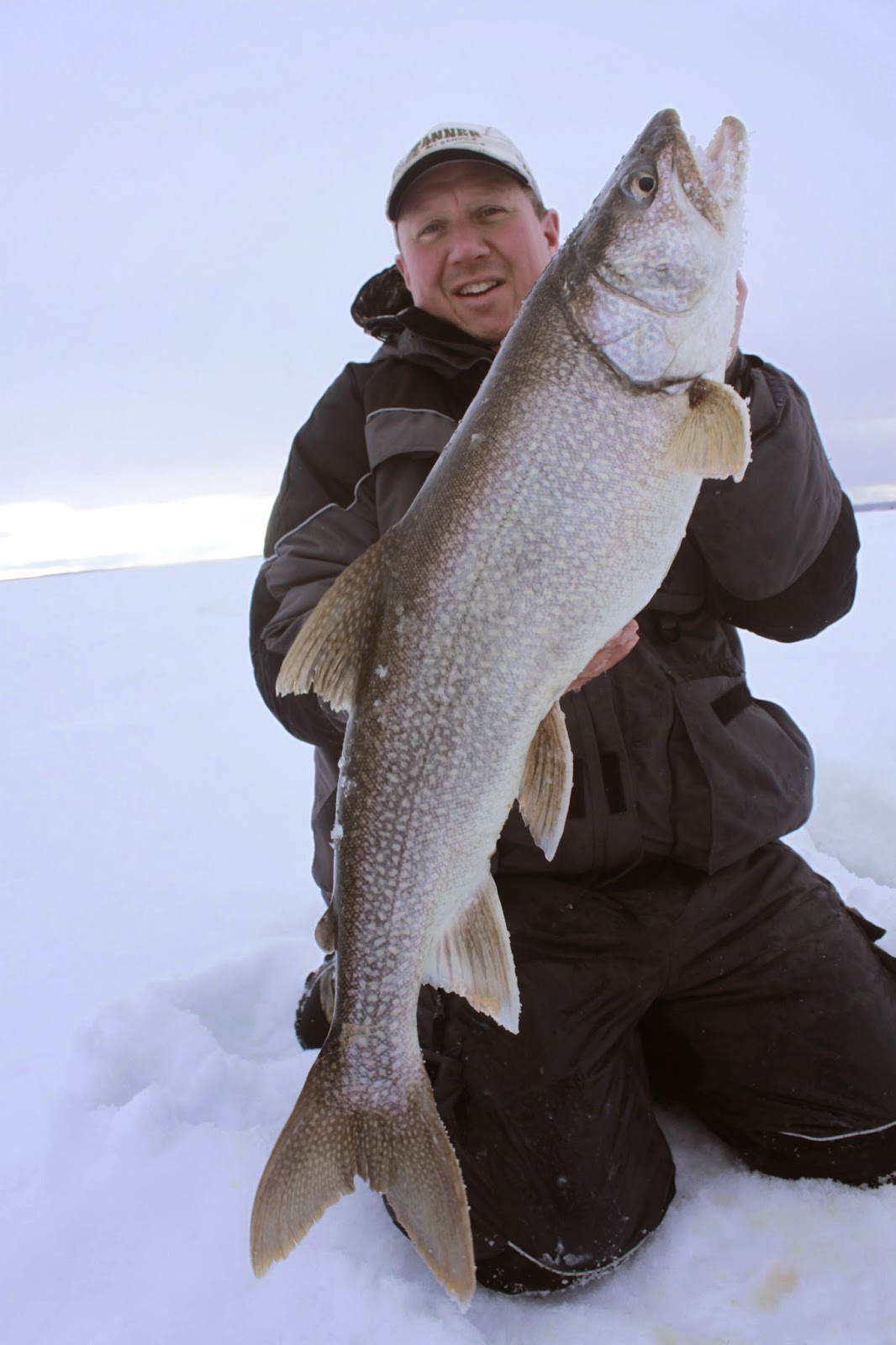 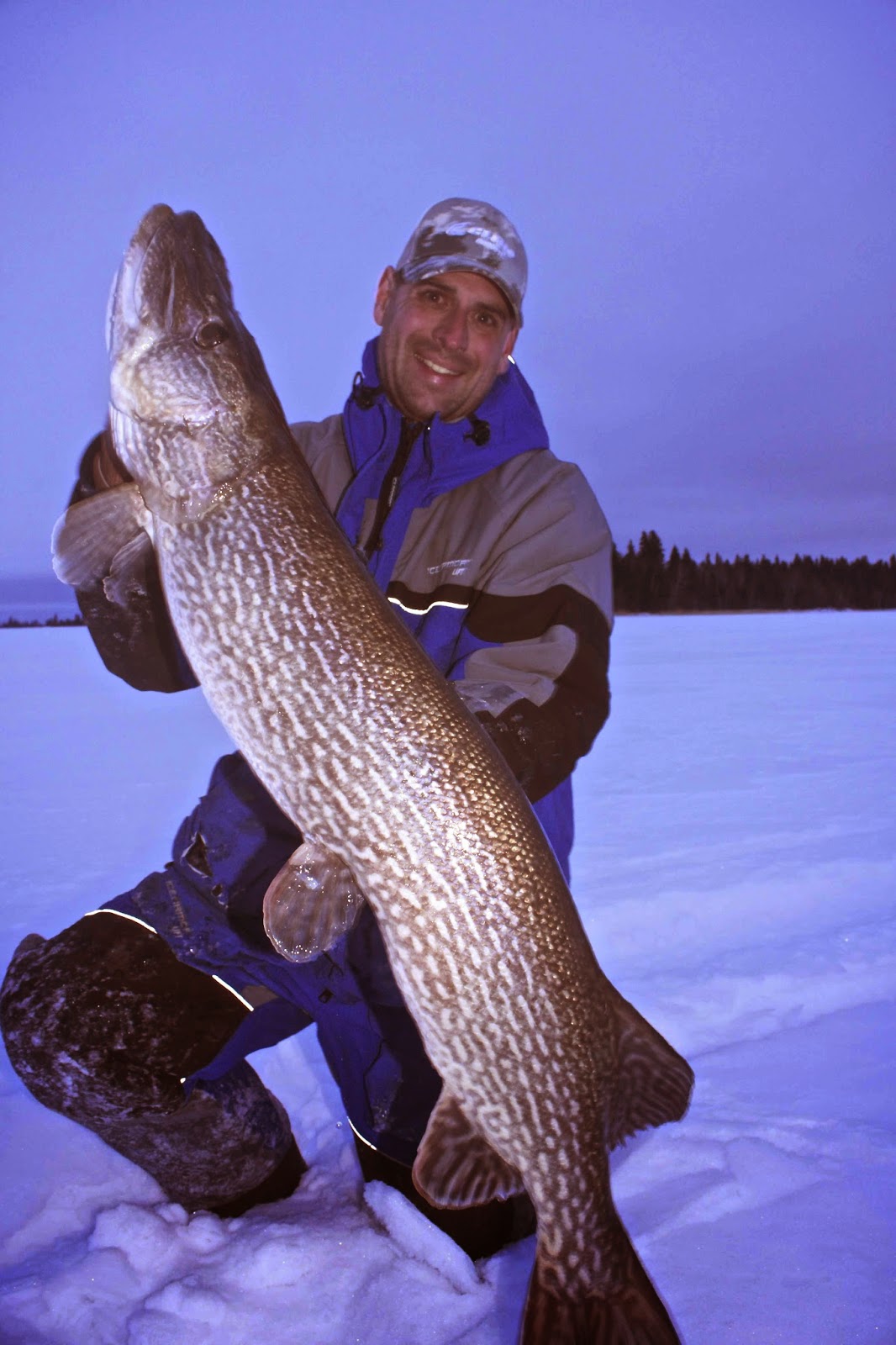 Posted by Wekusko Falls Lodge at 1:26 PM No comments: