2016 open water season was much stranger than ever before.  It was a success, but some fisherman had their heads spinning, trying to figure out what was going on.

The lakes all opened up around May 20th, and the water was low.  We had many clients hitting the water on season opener, looking for both walleye and pike.

Pike was slower than usual off the hop.  Since the water was low, many of the post spawning shallow areas were too warm or not enough water.  The big fish moved out to deeper water early, and so sight fishing big fish was a challenge.  Numbers of pike were high, mostly ranging in the 22-30" range.  We did manage to hook into a few low 40" pike, but scattered across the lake.

Walleye started hot, as good as I have ever seen on Tramping that early, landing multiple fish over 30" in the first few days.  Wekusko Lake was no different, with high numbers of walleyes below the falls and in berry creek, and also the odd master was thrown in.   We all thought it was keep getting better, but unfortunately we started getting some big rains.  This cooled the water down, and raised the lake level substantially.  Active walleyes were scattered across tramping lake, and the big girls were just staying low.  As July closed in, the big walleyes all of a sudden turned on and big fish were found.  This trend continued until mid July, where a flip happened.   The big fish slid out and small fish moved in, with a vengance.  Never have I seen the numbers of "eaters" on Tramping like that.  Boat loads, it was crazy.   Could catch a walleye just about anywhere!

Now Wekusko never slowed down.  It is amazing to think of the success story that lake has become.  Not only is the walleye population strong, but they are also getting big!  We caught our record amount of Masters out of that lake this year.  The fishery just never slowed down, not even in August, and September was almost considered out of this world.  I can't wait for the years to come.  More and more clients are even pulling out of Tramping to hit this walleye factory.

The pike in the summer and fall stayed consistent, with high numbers of the smaller fish being caught.  There were many accounts of big fish following but not taking.  I am not sure why the negative mood in the fish this year.  But one long time client Gene, rocked a 46" Pike with huge girth.    His biggest fish to date, with the biggest grin I have seen on him!

Walleye Master Anglers +28" - 337  (40 were Wekusko)    This number surprised me considering how June numbers were down.  And the biggest walleye (I guided) at 33 1/4"  Where did our super giants go......I am sure they are in there, was tough conditions this year.

Sauger - 32 this is hard to count accurately as many people don't even report them, but Wekusko is the best lake in Manitoba for big Sauger.    We did have one client catch a 23"!  He didn't know it was a sauger, and measured it but too big to keep (under 55cm).

So there you have it.  What next year will bring we have no idea.   We just know they are int eh water, and it's up to us to figure them out!  Water is ultra high right now, higher than I have ever seen it even in open water.  Maybe a good thing, maybe not.  Only one way to find out, get that line wet! 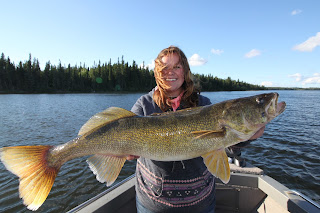