It was getting close to the end of June, and the giant walleye bite was really turning on.  A good friend and client Cory, was up and I was his guide.  I have been teaching Cory my big walleye tactics for a few years, and he was definitely catching on.  And as a BIG change for me,  I would actually be fishing while guiding!  But even with this excitement, I was having trouble getting pumped with big walleye.  When you see as may big walleye as I do, they start becoming the same old, same old.  (I know it sounds weird, but it is true.)  So on with the story....

Our first day was a classic walleye day, some cloud cover and some decent chop.  I was graphing some big independent fish, and it didn't take long and we were on some toads, including a beauty 31" with heavy girth.  I was wearing the shirt my kids and wife made for me for fathers day, and with the help of Cory, I got an awesome shot.  And even Cory caught a couple 30"s.  It was a good start.  But I had no idea what the next day would bring....... 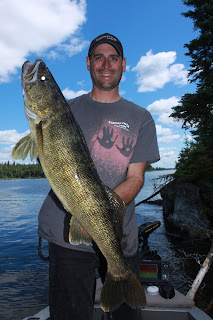 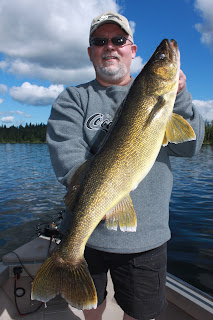 The next morning we had a plan....the wind slowed right down and turned from the north to the south.  And it was hot, and the water temperature increased 2 degrees F.   We decided to pack light, fish hard for the morning, and come back to some Elk Tenderloin for lunch, and then hit the water late afternoon again.

The morning started great.  The first fish I landed was a 31".  And then it went downhill hard.  A 26", and a 21" after many more passes.  The wind died right down, and it was starting to get hot.  We went on a hunt for fish, but were striking out everywhere we went, except for a few walleye under 15".  We were about to start heading home, and decided to try a last ditch effort in an area that I have never really done well before.

Pass after pass, double header after double header, my excitement kept growing.  Then I hooked one that owned me, and had head shakes just like the rest.  As I would gain and start to think I would see it, she took line right back to the bottom.  A few minutes later, I could see I was about to win the battle.  I was shaking, could see the bottom bouncer, and then she took another run under the boat back towards shore.  So I just held on, and then my heart sunk....she wrapped me on a log.  I could still feel her, but there was nothing I could do.  This happens going for big pike through the ice with tip ups, and all you can do is let the line go slack to see if the fish will swim away and get off the obstruction.  As I dropped the rod tip to give her some line, it didn't take long and I felt hew swim a bit, and then nothing, she dropped the hook.  It didn't take much to get my hook back up, but it took a while to get my composure back.   I honestly can say that I have never felt so sick in my life losing a fish.  I have lost some big big girls before, but none had my attention like this.  There is no doubt in my mind that this fish was a walleye, and was caught in the mouth, not foul hooked.  But with how light they were taking the hook, I just couldn't justify tightening the drag.  I guess we will never know what the fish was...or what I should have done.

We continued to slug it out with the fish, and we won most of the time.  We lost more, but we also landed many more.  We just couldn't fish fast enough.  But eventually by late afternoon, with no wind, no water left, no food, 32 C, and sun still blazing down on us, our heads were pounding and our arms were literally sore.  We gave in and headed home, after just one more master.

This is where I got awe struck.  I keep a record while I am guiding, and each fish gets recorded.  On the drive back, I started counting and I honestly had a hard time registering the numbers. I said to Cory " I must have read the same lines twice,  this number is impossible".  After double checking and triple checking, our number was confirmed...22 master anglers with 8 over 30" in one day, and 21 of them just in the afternoon!

My old record?  13 in one day which was four years ago.

I can honestly say, and Cory will attest to this, I have never been so excited walleye fishing in my life.  It was like the first time I laid eyes on a giant and caught the bug.  And as for Cory...he now has been spoiled for the rest of his life! 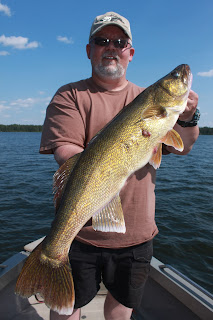 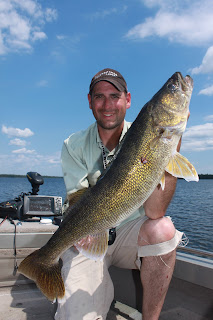 Posted by Wekusko Falls Lodge at 11:26 AM